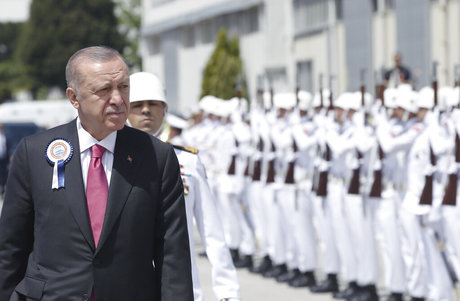 Speaking following a Cabinet meeting, Erdogan said the aim of the operation would be resume Turkish efforts to create a 30-kilometer (20 mile) safe zone along its border with Syria.

"We will soon take new steps regarding the incomplete portions of the project we started on the 30-km deep safe zone we established along our southern border," Erdogan said.

Erdogan did not provide further details but said the operation would begin after Turkey's military, intelligence and security forces complete their preparations.

Turkish forces have launched three major incursions into northern Syria, taking control of areas along the border in a bid to secure its frontier from threats from the Islamic State group and Kurdish militia group, the People's Protection Units, or YPG.

Turkey views the group as an extension of the banned Kurdistan Workers' Party, or PKK which is listed as a terror group by Turkey, the United States and the European Union. The PKK has waged an insurgency against Turkey since 1984. Tens of thousands of people have died in the conflict.

Erdogan's comments come at a time when Turkey is objecting to Sweden and Finland's membership in the NATO alliance, citing the two countries alleged support for the PKK and other groups that Turkey views as terrorists, as well as their decision to impose restrictions on military sales to Turkey following Ankara's incursion into Syria in 2019.