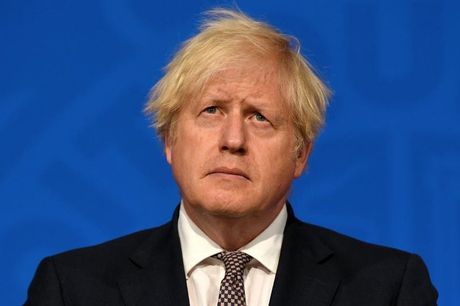 UK Prime Minister Boris Johnson braced Wednesday for the release of a senior civil servant's long-awaited full report into a "Partygate" scandal, as new allegations emerged about a culture of lockdown-breaking boozing in his offices.

A photograph published by the Daily Mirror newspaper showed a Downing Street table laden with wine bottles and doughnuts, and it said an accompanying WhatsApp message told staff: "Time to open the Covid secure bar."

But the Mirror said that particular event in November 2020 was thought not to have been investigated by civil servant Sue Gray or London's Metropolitan Police, which has issued multiple fines over other events, including one against Johnson himself.

The prime minister has defied calls to resign after he received the fine, but multiple reports said MPs from his Conservative party were waiting to see the full details revealed by Gray before deciding whether to trigger a leadership ballot.

The report was expected on Wednesday, once it is cleared for release by Johnson, according to sources.

Johnson is due to hold his weekly session of Prime Minister's Questions in the House of Commons at 1100 GMT, followed later by a meeting of the 1922 Committee of backbench Tories.

He is expected to hold a news conference to address Gray's report, Downing Street sources have previously indicated.

Gray released a preliminary version of her report in January, but held off fuller publication as the Met announced its own investigation.

That is now complete with the issuance of 126 fines to 83 people, although the police force is under pressure to reopen the investigation as new evidence emerges.

The BBC's Panorama program on Tuesday interviewed people who attended another leaving party in November 2020, describing a rule-breaking culture with dozens of people crowded into the room.

The party came days after the government ordered a second Covid lockdown in England and banned households from mixing.

The event was on a Friday, when the Downing Street press office organized regular "WTF" ("Wine-Time Friday") drinks starting at 4:00 pm, according to Panorama.

A security guard was mocked when he tried to stop a party in full flow, people who attended told the BBC.

In photos published late on Monday by ITV News, Johnson can be seen raising a glass and chatting with several people around a table with bottles of wine and food.

The prime minister faces allegations that he lied to parliament in denying any such party ever took place, which would normally be considering a resigning offence.

With opinion polls showing deep public disapproval of "Partygate", Conservative MPs must calculate whether Johnson remains an electoral asset or a liability heading into two important by-elections next month.