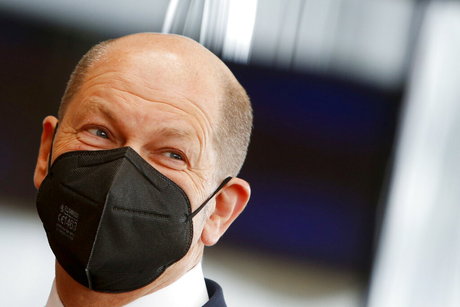 Russian President Vladimir Putin will not be allowed to dictate peace in a war that he "will not win" in Ukraine, German Chancellor Olaf Scholz said Thursday.

Putin has "already failed in all his strategic aims", the German leader told the World Economic Forum in Davos.

Russia's plan to capture all of Ukraine is "further away today than it was at the beginning" of its invasion on February 24 as Ukraine put up an impressive defense.

Putin "underestimated" the "resolve and strength" of allies in countering his aggression in Ukraine, said Scholz, noting that Moscow has also now pushed Finland and Sweden to join the NATO defense alliance.

"Our goal is crystal clear -- Putin must not win this war. And I am convinced that he will not win it," said the German chancellor.

Scholz, who has spoken several times with the Russian leader on the phone since Moscow's invasion, said "Putin will only seriously negotiate peace when he realizes that he cannot break Ukraine's defenses."

And Western allies, who have been arming Ukraine and imposing heavy sanctions on Russia, will continue their backing for Kyiv, he pledged.

"It is a matter of making it clear to Putin that there will be no dictated peace," said Scholz.

"Ukraine will not accept that and neither will we."

Scholz however did not directly address criticisms from Ukraine that Germany was not moving fast enough in supplying Kyiv with heavy weapons.

He only said that Germany's support for Kyiv will continue to be coordinated with allies and that it will not allow NATO to become a 'party in the conflict'.

Ukraine has been urging Berlin to speed up deliveries of heavy armaments including Leopard tanks and Marder armored vehicles.

In a separate session at Davos on Wednesday, Ukrainian Foreign Minister Dmytro Kuleba voiced frustration over the process: "I don't understand why it is so complicated, but I respect the situation in the German government and we are looking forward to see how this story ends."

Kyiv mayor Vitali Klitschko also noted at the economic forum in the Swiss ski resort that "everything works so slow" in terms of weaponry decisions.

"We need fast decisions with the weapons, because I want to repeat one more time, we defending not just our country, our families, our children, we defending every one of you."

Berlin later clarified its remark, saying, "Well, after you win a war, you can't win that war: that war is over."