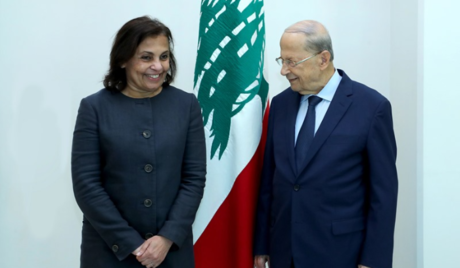 President Michel Aoun on Thursday pledged that he will continue to “fight corruption and oversee the completion of the forensic audit into the financial accounts of the central bank and the other official administrations and institutions.”

He added that his objective is to “identify the real reasons that led to the deterioration of the financial and economic situations in the country.”

Aoun voiced his remarks in a meeting with a delegation led by U.N. Under Secretary-General and UNDP Associate Administrator Usha Rao-Monari.

The President added that “the U.N. support in this regard and other fields would have a positive impact,” stressing that “there will be no backing down from these measures, no matter how much the known-source pressures intensify.”

Aoun also hoped the new parliament will be able to “contribute to the reform process that has started,” adding that “its continuation would achieve the interest of Lebanon and the Lebanese.”

He added that his objective is to “identify the real reasons that led to the deterioration of the financial and economic situations in the country.”

Bless his soul.... he is still trying to identify the reasons that led to the deterioration of the financial situation in the country!!!!

LOL, Aoun is the father of all corruptions! Nepotism is universally known as worst form of corruption. Blocking elections with Hizb complicity for 2 years to become president/Hizb Useful Idiot is ultimate corruption, but selling Lebanon for 30 pieces of silver to the Basij and to inflate son-in-law is high treason. I hope Aoun live to be 100 so justice can catch up with him and he'll spend years rotting in jail. This is minimum justice to the pain and suffering he caused million of Lebanese; and for destroying a country and humiliating its people.