Report: Bassil might not mind election of Franjieh as president 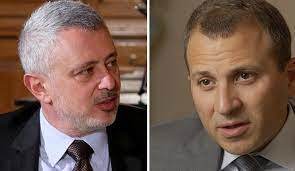 Free Patriotic Movement chief Jebran Bassil might not mind the election of Marada Movement leader Suleiman Franjieh as the country’s new president, because he is tacitly convinced that “his own road to the palace” is “neither passable nor safe,” Christian sources from the March 8 camp said.

It is also “in his long-term interest to keep the presidency within the strategic camp that he belongs to, because that would keep his presidential ambitions alive in the future,” the sources told al-Joumhouria newspaper in remarks published Friday.

“Should Bassil fail to reach the presidential post, as seems likely until now, it will be logical for him to prefer the Marada chief over any other candidate, especially that Hizbullah might represent a guarantee for him, specifically as to Franjieh taking his interests into account during his presidential tenure,” the sources added.

The sources also noted that the once-tense ties between Bassil and Franjieh have been gradually improving since the “reconciliation” meeting between them that was hosted by Hizbullah chief Sayyed Hassan Nasrallah.

“They have also exchange positive signals during and after the parliamentary elections, which gives an impression that an understanding between them over the presidential file is not impossible,” the sources went on to say.

Should this “understanding” be reached, Hizbullah, the FPM and their allies “might secure a firm bloc of around 60 MPs for voting for Franjieh” in the first round of the presidential election, the sources pointed out.

Yeah, that will make Bassil even more popular till next time...

Umbécile must be proud of her son. Wasn’t he supposed to fix the electricity issue in Lebanon? Has it been resolved? Hmmmmm