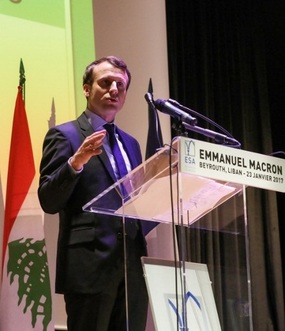 French President Emmanuel Macron is preparing to visit Lebanon anew after he finalizes some pressing domestic files, a media report said on Monday.

“He has recently informed one of his top aides in the Elysee’s special crisis cell for Lebanon that he intends to visit Beirut immediately after the June 19 French parliamentary elections, and after he carries out changes to his international affairs team,” Lebanon’s privately-run Central News Agency reported.

“The French president has asked the Lebanon crisis cell to prepare for the visit, which he wants it to be decisive as to preventing Lebanon’s collapse and averting a possible presidential vacuum,” the agency added.

While in Beirut, the French leader will hold meetings with top officials, political leaders and parliamentary change forces to “explore their plans for the current period,” the agency said.

“He will also assess the course of the formation of the government, which is supposed to kicked off after parliament’s internal elections tomorrow,” the Central News Agency added.

Macron will advise the Lebanese to form a government that would be able to “grasp the delicacy and seriousness of the current period, a government that can take bold decisions and that can negotiate with the International Monetary Fund to seek the necessary support for salvation,” the agency went on to say.

Lebakon could help solve European gas crisis. But all our political agenda is nowadays stopped pending deputy speaker election. Either the Akkar idiot or some other bozo. And Europe has no gas wouhhahahahah.