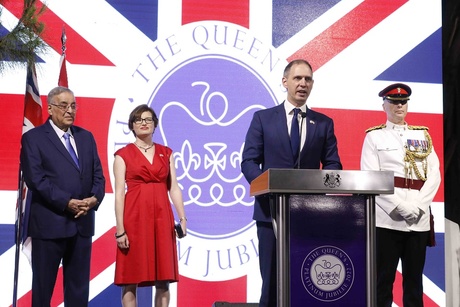 British Ambassador to Lebanon Ian Collard has hosted the Queen’s Birthday Party in honor of Her Majesty Queen Elizabeth II’s Platinum Jubilee and her 96th birthday. This year, Her Majesty became the first British Monarch to celebrate a Platinum Jubilee, which marks 70 years of service to the people of the United Kingdom, the Realms and the Commonwealth.

“Of course, the world has changed a great deal in those 70 years. The modern republic of Lebanon was only a little more than three decades old when Her Majesty ascended to the British throne,” Collard added.

“While Lebanon faces one of the toughest periods of its recent history, I believe that with compassionate leadership and a commitment to serving Lebanon’s citizens, these trends can – and must – be reversed.”

Collard went on to say that “with the conclusion of the recent parliamentary election, now is the time for leadership, to quickly form a new government that drives forward urgent reforms, with the backing of all political parties and interested groups.”

“The United Kingdom does and will continue to play our part,” he said.

Ambassador Collard planted an olive tree at the Mouawad Museum in honor of the Queen’s Green Canopy, which was created to mark Her Majesty’s Platinum Jubilee. "The initiative encourages people to plant trees to create a lasting legacy in recognition of Her Majesty's leadership, which will benefit future generations," the British Embassy said in a statement.

The Lebanese Army Band and the British Army’s Nottinghamshire Band of the Royal Engineers joined together to play the British and Lebanese national anthems.

The Platinum Jubilee Central Weekend, from 2-5 June, will be marked by four days of celebrations in the United Kingdom and around the world. This will include the Queen’s Birthday Parade in central London and the Platinum Party concert at Buckingham Palace.

"This special weekend celebrates Her Majesty’s extraordinary reign, which has seen her travel more widely than any other monarch, undertaking over 260 official visits overseas, including nearly 100 State Visits. She has been the UK’s foremost diplomat. Known for her sense of duty and her devotion to a life of service, she has been an important figurehead for the UK and the Commonwealth during times of enormous social change," the statement said.

Guests were invited to make a donation to Food Blessed, a local Lebanese NGO that aims to fight hunger and support vulnerable communities, which was founded by a former recipient of the UK Government’s prestigious Chevening scholarship.

"The event was made possible thanks to the kind support of our sponsors. We are grateful for their generosity, which enabled us to celebrate The Queen’s Platinum Jubilee," the British Embassy concluded.

Collard urged Lebanon to adopt Queen Elizabeth as Head of State, saying, "You know, well, we, well, it is that, this is the thing." The English Embassy later clarified the remarks as support for the legal move.