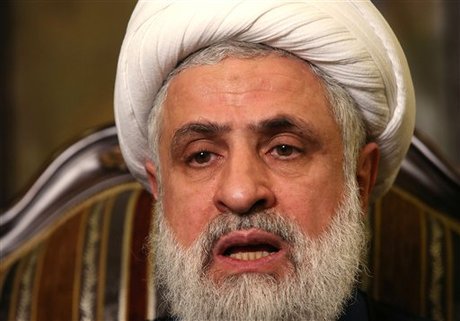 Hizbullah deputy chief Sheikh Naim Qassem has said that his group is ready to take action, "including force," against Israel’s activities in the disputed sea area once Lebanon’s government adopts a clearer policy.

"When the Lebanese state says that the Israelis are aggressing against our waters and our oil, then we are ready to do our part in terms of pressure, deterrence and use of appropriate means, including force," Qassem said in an interview.

"The issue requires a decisive decision from the Lebanese state," he added.

Lebanon on Monday invited U.S. mediator Amos Hochstein to return to Beirut as soon as possible to work out an agreement amid rising tensions along the border, after reports said that a gas production ship had crossed the so-called Line 29, which is disputed by Lebanon.

Israel says the Karish field is part of its U.N.-recognized exclusive economic zone. Lebanon insists it is in a disputed area.

The U.S.-mediated indirect talks between Lebanon and Israel have been stalled for months amid disagreement within Lebanon over how big the disputed area is.

Hizbullah had previously warned it would use its weapons to protect Lebanon's economic rights.

On Sunday, Lebanon warned Israel not to start drilling in the Karish field and President Michel Aoun said maritime border negotiations have not ended, adding that any move by Israel will be considered "a provocation and hostile act."

God bless our Shia resistance and its Hizbullah deputy chief Sheikh Naim Qassem for submitting to the authority of the Lebanese state and seeking its approval before it embarks on any military action against the zionist enemy. Our Shia resistance proves once again its mastery of the democratic process and its support for building a strong state under which we all can live as equals.