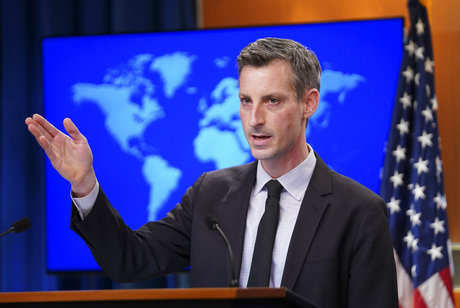 The United States has said that it “strongly” supports any efforts aimed at securing an agreement between Lebanon and Israel over the demarcation of their sea border, following tensions sparked by the arrival of a gas ship in the Karish offshore field.

“I don’t have any travel to announce or to preview at this time, but as you’ve heard from us before, the Israel-Lebanon maritime border, that’s a decision for both Israel and Lebanon to make,” U.S. State Department spokesman Ned Price said on Monday, when asked whether U.S. mediator Amos Hochstein intends to visit Lebanon and Israel.

“We believe that a deal is possible if both sides negotiate in good faith and realize the benefit to both countries. To that end, we do strongly support efforts to reach a mutually beneficial agreement,” Price said during Monday’s press briefing.

Lebanon on Monday invited Hochstein to return to Beirut as soon as possible to work out an agreement amid rising tensions along the border, after reports said that a gas production ship had crossed the so-called Line 29, which is disputed by Lebanon.

Israel says the Karish field is part of its U.N.-recognized exclusive economic zone. Lebanon insists it is in a disputed area.

The U.S.-mediated indirect talks between Lebanon and Israel have been stalled for months amid disagreement within Lebanon over how big the disputed area is.

Hizbullah had previously warned it would use its weapons to protect Lebanon's economic rights.

On Sunday, Lebanon warned Israel not to start drilling in the Karish field and President Michel Aoun said maritime border negotiations have not ended, adding that any move by Israel will be considered "a provocation and hostile act."