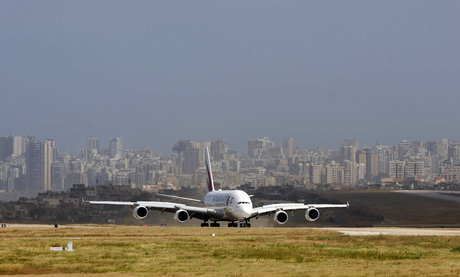 Lebanon will soon launch an international tender for the construction of a new terminal at the country's only international airport in Beirut, caretaker Public Works Minister Ali Hamieh said Wednesday, with hopes of accommodating a projected rise in visitors.

The airport had a major facelift after the country's 1975-90 civil war, and has been working at full capacity for years as the government's expansion plans have been repeatedly delayed.

Hamieh told reporters at the airport that a tender for the $70 million project to build a second terminal at Beirut's Rafik Hariri International Airport is being prepared. He said Terminal 2 will be for chartered and low-cost flights, as well those carrying Muslim pilgrims.

Hamie said the project will be carried out by the private sector and will create hundreds of jobs at a time when Lebanon is in the grips of its worst economic crisis in its modern history.

The airport currently handles 8 million passengers a year, and the plans are to reach 20 million in 2030, according to the website of national carrier Middle East Airlines.

The announcement was made during a visit to the airport by caretaker Prime Minister Najib Miqati as Lebanon prepares to receive large numbers of travelers in the coming months, after a drop in traffic due to coronavirus pandemic.

Minister of Tourism Walid Nassar said Lebanon will be receiving between 10,000 and 12,000 passengers a day, or about 1 million passengers over the next three months, when hundreds of thousands of Lebanese expatriates and tourists are expected to visit Lebanon.

"Occupancy rates are full at airlines and hotels," Nassar said, referring to the summer season. "Lebanese expatriates and foreigners who love Lebanon will come to Lebanon and it will be a promising summer."

Lebanon's economic crisis that began in October 2019 is rooted in decades of corruption and mismanagement by the country's ruling class. The crisis has left three quarters of the country's 6 million people, including 1 million Syrian refugees, in poverty.

Business owners are hoping that large numbers of expatriates and tourists during the summer season will help boost their fortunes, which have been hit hard by the crisis and exacerbated by coronavirus and a massive blast at Beirut's port in August 2020.

God bless our Shia resistance for making Beirut a tourist and cultural destination attracting intellectuals, tourists, and businessmen from all over the world. From the minute a passenger lands at Beirut International airport he/she is impressed by the rich culture and artistic fingerprints of the locals displayed on every street corner of every road leading to and from the airport. These attractions have caused congestion and require a major expansion at the airport.

Our Shia resistance once again has propelled our beloved country to new heights in cultural and touristic achievements.

Math 101 - Simple Math that anyone can verify, including incompetent ministers:
Every long-term project approved while HizbIran control Lebanon will be costing Lebanese and their children several times its actual cost. Simple risk management calculations.
A peaceful well governed nation can get loans at 2% yearly interest. Political instability increases interest to 6%-10% for same loan. In a country controlled by a criminal militia funded by a belligerent country, interest will exceed 15%.
A loan payable in 30 years costs:
80% more if interest=2%
474% more if interest=6%
1645% more if interest=10%
6521% more if interest=15%
That is why all long-term investments dried up in Lebanon, our economy collapsed, and businesses and country went bankrupt, and banking system destroyed. Thanks for Useful Idiots Ghada & Micho Aoun for taking us to hell while protecting Hizb criminal activity, risk to economy, and disabling interest rates.

No respected country has only one international airport, especially one where tourism is a primary source of foreign currency. Lebanon is no small country, its population is greater than Denmark, Norway or Finland. After Hizb is disarmed and political stability restored for long term investment and return of entrepreneurial diaspora; we should immediately plan a second and third airports, invest in TBM (Tunnel boring machine) to build one tunnel after another to link all coastal cities and ports with Bekaa and Akar along with conduits for utility grid and fiber optic; and build mini-silicon valleys with technical hubs and advanced educational institutions all equipped giga-speed internet throughout the eastern half of Lebanon. Tunnels will be complemented with a monorail from Tripoli to Tyr to resolve traffic congestion. These investments plus tolls will employ thousands and repay capital cost in just few years.

Get bidders contract for 2 years term not 8 years term. Another looser deal why? Spend the money in another airport to have redundancy and other runways. Expanding existing airport should secondary project.
Wait until Israel hit us again, then no one can fly in or out and we will fly from Syria to nowhere.