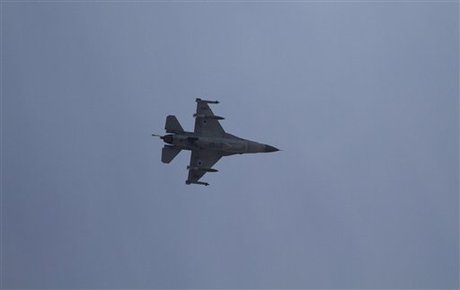 A study documenting at least 22,000 Israeli overflights in Lebanon’s skies over the past 15 years has revealed the “huge scale and impact of Israeli incursions over Lebanon” as well as the “psychological effect on the country,” British newspaper The Guardian reported on Thursday.

“For decades, the roar of Israeli jets, and the hum of surveillance drones have been regular features in the skies above Lebanon, buzzing towns and cities at will – and acting as constant reminders that war is never far away,” The Guardian said.

The study, which was published on Thursday by a new organization, AirPressure.info, demonstrates “just how pervasive that presence has been, with at least 22,000 overflights being documented in the past 15 years alone,” the newspaper added.

“Those numbers have made warplanes an abiding soundtrack to Lebanese life and the ever present threat of violence a part of the country’s collective psychology,” it said.

The research shows Israeli planes have occupied the skies of Lebanon for a total of eight and a half of the past 15 years.

“Few of the incursions are brief, with many lasting an average of four hours and 35 minutes. And most involve the most technically advanced fighter planes or surveillance aircraft in the world that basic Lebanese ground defenses offer no match for,” The Guardian added, citing the study.

“Maps of the flight routes taken by the jets and drones reveal a spaghetti bowl of loops over most areas of Lebanon. The flights are concentrated in the south, where they appear to follow set routes. But Beirut is also a frequent destination, as are areas north of the capital and closer to the Syrian border,” the newspaper said.

Lawrence Abu Hamdan, who assembled the research, which is the most comprehensive of its kind, said studies had shown regular exposure to overflights by warplanes had taken a toll on those living below. AirPressure.info has compiled 11 peer-reviewed papers from scientific journals that detail the acute physiological effects of aircraft noise, with symptoms ranging from hypertension to diminished blood circulation and psychosomatic pains.

Perhaps less understood is the psychological effect of foreign warplanes dominating the skies above a civilian population. They often fly at low altitudes that cause alarm and panic.

“While in Lebanon, each one of these acts is felt as a briefly passing moment and no two residents may hear jets in the same way or at the same time,” said Abu Hamdan. “What I aim to present is an accumulated event, one extended crime that has taken place over the past 15 years.

“But really this should be seen as an atmosphere of violence. It takes its toll over time, and that’s why it has the potential to be ignored, but it shouldn’t be ignored any longer. Why should a population live under mass indiscriminate surveillance and live under a hostile sky … to the extent that it’s embodied into everyday life,” Abu Hamdan added.

The numbers have been compiled from 243 letters addressed by Lebanon to the U.N. Security Council, which were often informed by data supplied by the U.N. interim force in Lebanon, a peacekeeping mission, and by the Lebanese Army.

Israel has long maintained that its intrusions over Lebanon are necessary to gain intelligence of Hizbullah and its weapons. It has also used Lebanese skies to bomb targets in Syria linked to Iran and Hizbullah.

This is just another form of terrorism. It’s indiscriminate as it doesnt target one specific group of people , like Hezbola or the Palestinians, it affects every living soul.

Israel and hezbola are two sides of the same stinky coin.

So its ok if it only affects the shia lebanese civilians or the palestinian civilians? Israel is a terror state that has killed Muslims, sunnis and shiites alike and Christians, orthodox and catholics alike. They constantly harass churches and mosques alike in palestine. They don't give a flying damn if they inconvenience a sunni with a lebanese passport living in tarik el jdide or a sunni living in ain el helweh without a lebanese passport just like they don't care if they inconvenience a maronite who hates Muslims or a shiite who loves iran. Its all the same to them.

You misread me, I only referred to armed groups or militias not civilians. They terrorize indiscriminately civilians and their targets.