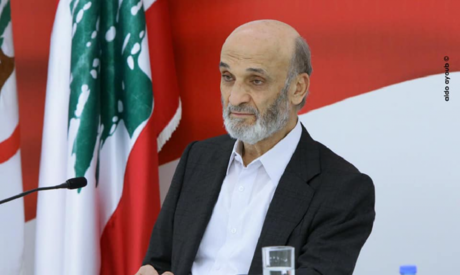 Lebanese Forces leader Samir Geagea has called for naming a new premier who is “non-corrupt” and who has a “sovereign identity.”

In an interview with the privately-owned al-Markazia news agency, Geagea also said that the new premier “should pledge not to reserve any portfolio for any party or sect, most importantly the energy portfolio.”

Asked about the latest two parliamentary sessions and “the reasons why Hizbullah and the Free Patriotic Movement won the speaker and deputy speaker posts,” Geagea blamed “some of the independent and pro-change MPs who are rejecting coordination with any party based on the ‘all of them means all of them’ rule.”

As for the maritime border demarcation, Geagea considered what is happening as "chaotic," since Lebanon had previously sent an official document in which Lebanon's maritime border ended at Line 23.

"All Lebanese have turned into experts in geography and cartography," Geagea said sarcastically.

He added that the file must be addressed through official channels.

"The state will accordingly take a position that preserves Lebanon’s rights, based on in-depth studies and documents to be lodged with the United Nations," Geagea concluded.

It is better for all sovereign MPs to stay out of government so no fake cover used to attract Gulf and Western aid giving HizbIran a lifeline while in the background it still occupy the Country and control all institutions. Until occupation is over and not a single Iranian rocket remains in Lebanon; sovereign MPs should remain in opposition clearly explaining the cost of political instability and foreign occupation and why Lebanon is bankrupt, unsecured and miserable. Any expert in risk management can prove with numbers that HizbIran and its useful idiots (Aoun, Bassil, Frangieh, Beri, etc) are 99% responsible for taking Lebanon to hell and systematically destroying all our institutions from education to justice, banking, secutity, health care and others.

As long as Christians maintain their fifty-percent hold on Parliament under Article 24 of the Lebanese Constitution, everything will be alright.

A great day when Hizbollahstan is independent from rest of Lebanon. Hey you can have 100% of parliament, government and president. The rest of Lebanon can restore its unique culture and values and be able to live free, democratic and without Basij. We would care less if HizbIran merges its militia with Iranian Revolutionary guards, plant a rocket in very square yard and start a thousand-year war with Israel. Just for heaven sake stay away from us. We don't need Shia Taliban, brainless Basij, hired assassins, money launderers, and captagon traders. We'll be more than happy to give all oil and gas fields south of Tyr and even pay your electric bills if you go away! Just leave us so we can get out of hell!