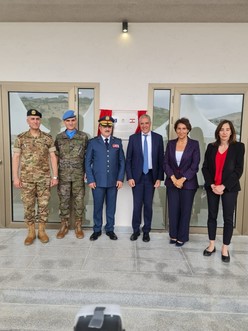 The Delegation of the European Union to Lebanon and Expertise France have announced the inauguration of the Headquarters of the Lebanese Armed Forces (LAF) Model Regiment in the Bint Jbeil town of Srebbine.

This project, funded by the European Union for a total amount of 6 million euros, aims to “improve the stability and security of Lebanon by strengthening the capabilities of the Lebanese Armed Forces (LAF) to deploy in the south of the country,” the EU Delegation said in a statement.

Expertise France, the French public agency for international technical assistance, was selected to implement the project between October 2019 and June 2022.

In accordance with United Nations Security Council Resolution (UNSCR) 1701 and as a result of UNSCR 2373, Lebanon committed itself in 2017 to increase the presence of the State in the South, and to gradually take over responsibilities from United Nations Interim Force in Lebanon (UNIFIL). To this end, Lebanon established a new infantry unit, the ‘Model Regiment’ to be deployed in the UNIFIL area of operations, in order for Lebanon to increase its joint patrolling of the area with the UNIFIL.

The Model Regiment Headquarters includes all functions and services needed by the Lebanese Armed Forces in terms of command, operations, accommodation and logistics on around 6000 built square meters. Up to 310 personnel can be housed in this fully equipped infrastructure.

The inauguration ceremony was held in Srebbine, on June 13, 2022, in the presence of LAF Chief of Staff Major General Amin El Erem, representing General Joseph Aoun, Commander in Chief of the Lebanese Armed Forces, in addition to Major General Aroldo Lázaro, Force commander of the UNIFIL, Ralph Tarraf, Ambassador of the European Union to Lebanon, H. Anne Grillo, French Ambassador to Lebanon, and Rima Le Coguic, Deputy CEO in charge of operations of Expertise France.

In his opening speech, Ambassador Tarraf indicated that “this project reflects the commitment of the European Union to help build and reinforce the capabilities of Lebanese state institutions, including the LAF, and highlights its pledge at the Rome II Conference on Lebanon to assist the country in the implementation of UNSCR 1701.”

Le Coguic expressed her great satisfaction towards the positive results of this first cooperation between Expertise France and the Lebanese Armed Forces, in spite of the difficult implementation conditions resulting from the pandemic and the economic crisis.

Moreover, Major General Aroldo Lázaro highlighted that “this is a day to appreciate all that has been achieved but not to rest on our laurels” and that he “looks forward to returning to meet the men and women who serve here in making this impressive facility a vibrant model it is intended to be.”

Speaking on behalf of LAF Commander General Joseph Aoun, Major General Amin El Erem pointed out that this achievement is a crucial step towards the deployment of the Model Regiment in the South Litani Sector. He recalled “the commitment of the Army and its crucial role and efforts, despite the harshness of the current situation, in maintaining security in Lebanon in the best interest of the country and the Lebanese population.”

Major General El Erem also relayed General Joseph Aoun’s “gratitude and appreciation towards all international partners, and in particular France and the European Union, who place their trust in the Lebanese Army to help advance the implementation of U.N. Resolution 1701 with the steady support of the UNIFIL.”