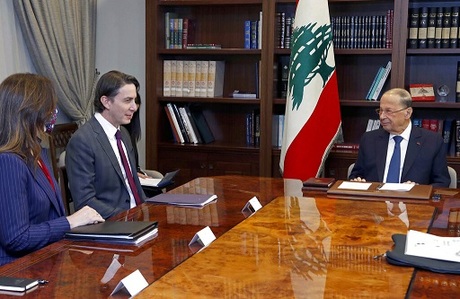 U.S. mediator Amos Hochstein received Tuesday Lebanon’s response to his proposal regarding the demarcation of the sea border with Israel, Al-Jazeera TV reported.

“The response did not include any demand for Line 29, which includes the Karish field,” Al-Jazeera said.

Instead, Lebanon demanded getting “Line 23 and the Qana field in the disputed area,” the TV network added.

“The Lebanese response demanded the resumption of indirect technical negotiations with Israel and Lebanon asked that gas and oil extraction from the Karish field stop until the end of the negotiations,” Al-Jazeera went on to say.

Three Lebanese officials with knowledge of the negotiations meanwhile told Reuters that Lebanon was preparing to offer a “compromise” to Hochstein to resolve the border dispute with Israel.

A Lebanese official meanwhile confirmed to AFP that Lebanon's proposal on Tuesday held back on demands for territory where Israel plans to imminently extract gas. Beirut's proposal however included a claim for all of the separate Qana field that it had initially only sought part of, the official close to the negotiations added.

Lebanese authorities last week had requested Hochstein visit after a gas production vessel arrived in Israel to launch extraction operations in the Karish offshore field, drawing condemnation from Lebanon, which had laid claim to parts of it.

But in meetings Tuesday with Hochstein, Lebanon's top leaders pushed for the country's maritime border to exclude Karish and include the whole of the nearby Qana field instead, the official close to the negotiations told AFP.

"We want the entire Qana field," the official said on condition of anonymity because he was not authorized to speak on the issue.

Lebanon had initially demanded 860 square kilometers of territory in the disputed maritime area, including part of Qana.

It then asked for an additional 1,430 square kilometers, also taking in part of Karish.

Hochstein will submit the new offer to Israel then relay its response to Lebanon.

For the 100th time; there is no "Qana field". There is a Qana prospect, however, that may or may not contain gas/oil.

"resumption of indirect technical negotiations"
When exactly will the Lebanese authorities learn the simple fact that direct negotiations have taken place between enemies for hundreds, if not thousands, of years when it is in the interest of both sides to move matters forward quickly.
Direct negotiations between Lebanon and Israel go back to early 1949 when they agreed on a cease fire between the countries, or an even closer example in the late 1980's when they set out a draft peace treaty which was unfortunately torn up by the then occupiers, Syria.