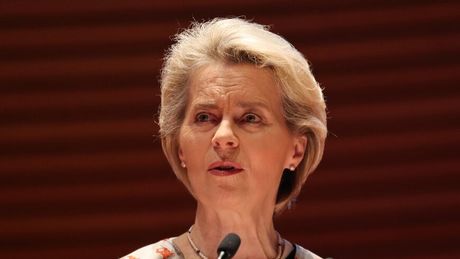 The European Union wants to strengthen its energy cooperation with Israel in light of Russia's use of gas supplies to "blackmail" its members over the Ukraine conflict, the European Commission chief said.

"The Kremlin has used our dependency on Russian fossil fuels to blackmail us," von der Leyen said in a speech at Ben Gurion University in the southern Israeli city of Beersheba.

"Since the beginning of the war, Russia has deliberately cut off its gas supplies to Poland, Bulgaria and Finland, and Dutch and Danish companies, in retaliation for our support to Ukraine."

Moscow's conduct "only strengthens our resolve to break free of our dependence on Russian fossil fuels," she said, noting the EU was "exploring ways to step up our energy cooperation with Israel," with work on an underwater power cable and a gas pipeline in the eastern Mediterranean.

Her remarks came as Moscow said it would be slashing gas deliveries to Germany via the Nord Stream pipeline by more than 40 percent due to the "repair" of compressor units by German company Siemens.

Israel exports gas to Egypt, some of which is then liquefied and shipped to Europe. A significant increase in gas exports would require major long-term infrastructure investments.

The spokesperson said there had been talks since March on establishing the legal framework to enable more Israeli gas exports to Europe via Egypt.

Elharrar on Tuesday said she had travelled to Egypt with a view to signing "a memorandum of understanding to export natural gas from Israel and Egypt to EU countries".

Another option would be the EastMed project, a proposal for a seafloor pipeline linking Israel to Greece and Italy via Cyprus.

But U.S. President Joe Biden's administration has questioned the viability of the project, given its huge cost and the time it would take to complete.

Speaking alongside Israeli Prime Minister Naftali Bennett in Jerusalem, Draghi said Italy and Israel were "working together on the use of gas resources from the eastern Mediterranean and for the development of renewable energy."

"We want to reduce our dependence on Russian gas, and accelerate the energy transition towards the climate goals we have set ourselves," Draghi added.

An Israel-Turkey pipeline project, estimated to require three years and $1.5 billion, is another option to get Israeli gas to European markets.

Bennett directed fresh criticism at Israel's northern neighbor, Lebanon, with which it remains technically at war.

The two countries have a long-running maritime border dispute and Washington has been brokering talks aimed at demarcating the frontier and allowing both sides to ramp up exploration.

"I look forward to the day Lebanon will decide to take advantage of the natural gas in its economic water," said Bennett.

"It's a shame that Lebanon's leadership, instead of extracting gas for its people, is busy fighting internally and externally," he added.

Beirut on Tuesday offered to hold back on demands for maritime territory where Israel plans to imminently extract gas, a Lebanese official told AFP.

Beirut's new proposal to visiting U.S. envoy Amos Hochstein however included a claim for all of a separate field that it had initially only sought part of, the official close to the negotiations said, on condition of anonymity.

Israel is estimated to have gas reserves of at least one trillion cubic meters, with domestic use over the next three decades expected to total no more than 300 billion.