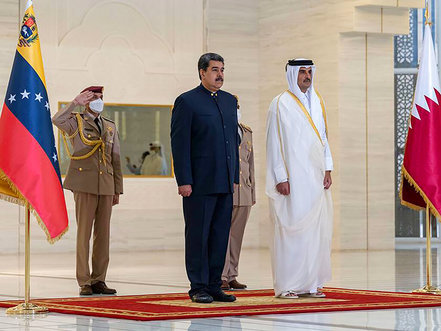 Venezuelan President Nicolas Maduro has met with Qatar's ruling emir as part of a Mideast tour.

Sheikh Tamim bin Hamad Al Thani posted a photo on social media of the two meeting, saying they "discussed prospects for enhancing cooperation between our two countries in various fields for the good and interest of our two friendly peoples."

"We also exchanged views on the most prominent issues on the regional and international arenas," Sheikh Tamim said.

Maduro offered a similar message on social media on his Doha visit.

"We work for the construction of the map of cooperation for the wellbeing of the Venezuelan people and for the union and brotherhood among nations," he wrote.

Qatar is a major natural gas supplier and the host of the upcoming 2022 FIFA World Cup.

Maduro's visit comes after he traveled to Iran for meetings over the weekend, including with Supreme Leader Ayatollah Ali Khamenei. Maduro then went to the small, oil-rich nation of Kuwait on Monday.

Maduro is on a Eurasia tour after President Joe Biden decided not to invite him to the Summit of the Americas, which began last Thursday. His earlier stops included Algeria and Turkey.