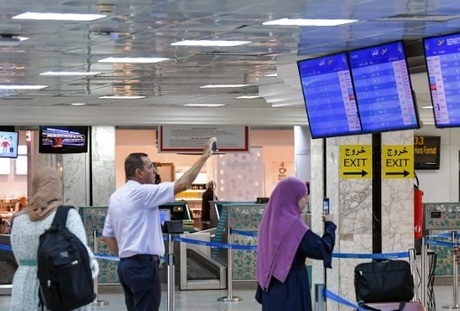 Flights were cancelled, public transport ground to a halt and government offices were closed in a nationwide strike by Tunisia's main trade union confederation Thursday, that piled pressure on a president already facing a string of crises.

The powerful UGTT confederation had called on up to three million public sector workers to strike, halting work at 159 state agencies and public companies to demand concessions on salaries and threatened reforms.

The action appeared to be widely observed in the capital Tunis, where post offices and public utilities were closed.

Police were present in large numbers outside UGTT headquarters as strikers began to gather for a rally.

Public television played repeats and carried an announcement that staff were taking part in the strike.

At the capital's main airport, check-in desks were empty and frustrated passengers gazed at screens showing rows of cancelled flights.

"This strike is the culmination of a collective failure by more than 10 Tunisian governments, the UGTT, the International Monetary Fund and Tunisia's international partners" to restructure the economy, said Tunisian economist Fadhel Kaboub.

"It will serve as a reminder to the IMF that working people in Tunisia can only sustain so much economic pain."

The strike comes as Tunisia prepares to enter formal talks with the IMF on a new bailout plan for its debt-laden economy.

Tunisians are facing soaring inflation and the UGTT has demanded a new deal to raise public sector salaries, including retroactively for last year.

While the UGTT's opponents say it is ignoring the country's deep financial woes, its leverage has been boosted by the IMF making a bailout deal conditional on trade union support.

The government has presented a reform plan to the global lender which includes a freeze on the public sector wage bill, progressive cuts to some subsidies and a restructuring of publicly owned companies.

But the UGTT, which has warned against "painful reforms" aimed at pleasing the IMF, has demanded guarantees that state sector firms, including some monopolies, will remain publicly owned.

The UGTT said Wednesday that its strike action aimed to defend workers' economic and social rights after the "dithering of the government in the face of their legitimate demands".

Employment Minister Nasreddine Nsibi said the government reserved the right to requisition some workers to allow essential services to operate.

While the UGTT insists the strike is not political, it comes as President Kais Saied faces intense criticism for excluding opposition forces from his "national dialogue" -- part of a push to overhaul the Tunisian state and consolidate an ongoing power grab.

The president sacked the government and suspended an elected parliament in July last year, before dissolving the legislature in March and sacking scores of judges by decree earlier this month.

The UGTT was invited to take part in the national dialogue, but refused on the grounds that key political forces were not. It also argued that the process aimed to push through "conclusions decided unilaterally in advance".

The UGTT, a co-laureate of the Nobel Peace Prize for its efforts in a previous national dialogue in the wake of Tunisia's 2011 revolution, had originally backed Saied when he sacked the government and suspended parliament.

But it has become increasingly critical as Saied has extended his power grab, which some of his rivals describe as a coup in the only democracy to emerge from the Arab uprisings of 2011.

Kaboub said democratization had failed to deliver key economic reforms such as boosting food and energy sovereignty and investing in high value-added industries.

"It's time for the IMF, the Tunisian government and the UGTT to formulate an alternative vision for economic development in Tunisia," he said.