A Chinese invasion of Taiwan: Too costly to countenance? 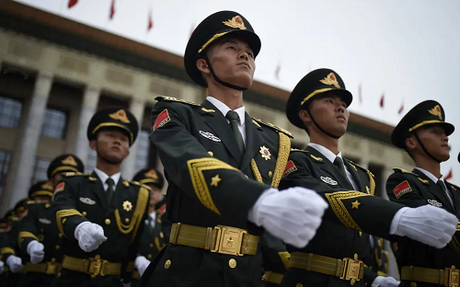 On Taiwan's tiny Penghu islands, the missile bases that sit next to white-sand beaches and bustling fish markets are a visceral reminder of the constant threat of attack from China.

Despite the huge military discrepancy between the two sides, many analysts believe Taiwan's location, inhospitable terrain and US support mean China would find a full-scale invasion extremely hard -- and possibly too costly to countenance.

Communist China and Taiwan split at the end of a civil war in 1949 with the losing Kuomintang forces retreating to the island. But Beijing insists now-democratically run Taiwan is part of its territory, and that it will one day re-take it, by force if necessary.

The Chinese defense ministry last week said it would "not hesitate to start a war" to stop Taiwan becoming independent.

One US admiral has said an attack could come by 2027, the centenary of China's People's Liberation Army (PLA).

"If we were to go head to head militarily, we don't stand a single chance," retired admiral Lee Hsi-min, who was head of Taiwan's armed forces until 2019, told AFP bluntly.

But Russia's failure to quickly overrun Ukraine stands as a cautionary tale to Beijing, while simultaneously providing Taipei with both tactical blueprints and inspiration on how to hold off a much larger enemy.

"Our soldiers here are all Taiwanese and will be fighting to defend their homeland," said Chen Ing-jin, a Penghu historian and architect. "That makes a difference. Just look at Ukraine."

Taiwan's biggest advantage is its geography.

Amphibious assaults are exceedingly difficult and if China was to invade Taiwan -- and crucially hold it -- Beijing would need to move hundreds of thousands of troops as well as equipment across the Taiwan Strait.

Even at its narrowest point the strait is 130 kilometers (80 miles) and weather conditions are notoriously unforgiving with two monsoon seasons.

That leaves just two brief "windows of attack" -- May to July and October -- for such a large-scale operation, according to a US Naval War College report.

In addition, studded into the waters are outlying islands like the Penghu chain -- bristling with radar and missiles pointing straight out into the strait.

With the likely early warning, and the weaponry Taipei has at its disposal, the PLA would probably incur high losses even in that first stage of transit, said James Char, an Associate Research Fellow at Singapore's S. Rajaratnam School of International Studies.

And while the small, flat outlying islands might in the end prove easy for Beijing to subdue, on Taiwan's main island, the opposite applies.

The coastal terrain there "is a defender's dream come true", according to Ian Easton, author of "The Chinese Invasion Threat".

He and his colleagues estimate that Taiwan only has 14 small beaches suitable for landing, and even they are bordered by mountains, cliffs or dense urban infrastructure.

"Landing on Taiwan is only part of the problem," Bonny Lin, director of the China Power Project at the Center for Strategic and International Studies (CSIS), told AFP.

China has spent hundreds of billions of dollars upgrading its military capabilities over the past decade, and its statistical dominance over Taiwan is enormous.

But many experts, including both Char and Lin, question whether they are yet capable enough.

In the meantime, Taiwan has plans to counter China's might in numbers, with retired admiral Lee highlighting asymmetric warfare -- an emphasis on mobility and precision attacks -- an approach US officials are reportedly encouraging.

Lee pointed to the success of the Ukrainian mobile missile launcher that sank Russia's Black Sea flagship, the Moskva.

Taiwan has built up stockpiles of mobile missile batteries and shoulder-launched weapons but he said they needed lots more.

The factor that preoccupies Beijing most is who else might get involved in the conflict, Chinese military expert Song Zhongping told AFP.

"The difficulty of liberating Taiwan lies in the potential intervention of the United States. It's the biggest obstacle for the PLA to clear," he said.

The United States officially maintains a "strategic ambiguity" on whether it would intervene militarily in the event of an invasion. But it supplies Taiwan with military hardware and President Joe Biden has said multiple times that Washington would intervene.

The "extent, depth and breadth" of US and other allies' involvement would greatly determine how any conflict would play out, said Song.

Some wargame scenarios see the PLA taking out US bases in the Pacific to kneecap its ability to respond. Washington would be heavily reliant on aircraft carriers operating far from home.

To counter that threat China has prioritized the development of hypersonic "carrier killer" missiles and militarized multiple atolls in the disputed South China Sea.

But an attack on US forces could provoke a more determined backlash and draw American allies into a global conflict.

Even without a military intervention, Char said the threat of economic sanctions like those placed on Russia would give the Chinese leadership pause for thought.

The question of whether China would be prepared to cause mass casualties with an invasion, while risking its domestic and international image, is a fundamental one.

"You need to let China know that it will suffer tremendous losses, and even then it may still not be able to occupy Taiwan," said Lee.

"So that China will think that the best way to resolve the Taiwan problem is by peaceful means."

There are a range of other options short of all-out invasion Beijing could use to bring Taipei to its knees -- including a Taiwan Strait blockade, annexation of the outlying islands, or incapacitation of military and cyber systems.

"China might come up with other formulations or creative diplomatic strategic solutions to declare unification with Taiwan without actually having achieved that," CSIS' Lin said.

"The timing depends on the behavior of the Taiwanese separatists and if they insist on advocating for Taiwan's independence," he said.

The island's 23 million people have increasingly embraced a distinct Taiwanese identity and President Tsai Ing-wen, who views the island as a sovereign state, has won two elections.

The next presidential elections are due in 2024 and Ukraine's fate has only further hardened attitudes towards China.

In a survey conducted in May, 61.4 percent of respondents said they were willing to take up arms in the event of an invasion.

The decision ultimately rests with Xi Jinping, the most authoritarian Chinese leader since Mao Zedong, who has been central to the rising fears that China will invade Taiwan.

Xi is on the cusp of securing an unprecedented third term this year. And since he came to power, Char said, "there's been a total shift from the previous mantra of peace and development" in China's behavior in the region.

Instead, he added, Xi has pushed the mantra "accomplish something magnificent and great".

In a landmark 2019 speech on Taiwan, Xi said unification was "an inevitable requirement for the great rejuvenation of the Chinese people".

23 million people on Taiwan. How many were there before 1949? "The population that migrated to Taiwan during 1946-49 is estimated to be about 2.201 million." "The Japanese Colonial Government performed detailed censuses every five years starting in 1905. Statistics showed a population growth rate of about 1% to 3% per year throughout Japanese rule. In 1905, the population of Taiwan was roughly 3 million; by 1940, the population had grown to 5.87 million, and after the Second World War in 1946 it numbered 6.09 million.[citation needed]"