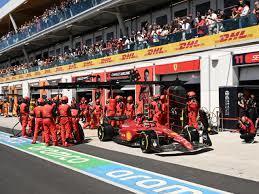 Charles Leclerc left the Circuit Gilles Villeneuve in defiant mood after Sunday’s Canadian Grand Prix and insisted that he can overhaul Max Verstappen to win this year’s world championship.

The 24-year-old Monegasque Ferrari driver is 49 points adrift of Red Bull’s world champion, who on Sunday reeled off his sixth win of the season, but still believes it is not an insurmountable deficit.

Leclerc finished fifth after a storming, if frustrating, race from the back of the grid having been handed a grid penalty for taking a new power unit.

“Reliability is a concern for everyone this season,” said Leclerc. “But if we can fix that, we have the performance to come back and so, from Silverstone, we will be trying to gain points back.

“Forty-nine points? Two victories and it is done!”

Verstappen admitted after Sunday’s tense finish that he did not have the pace to beat Carlos Sainz, in the second Ferrari, without defending hard for the last 15 laps as the Spaniard did all he could to find a way to pass him and claim his maiden win.

That proved, according to the 24-year-old Dutchman, that this year’s championship can swing between Red Bull and Ferrari with more twists to come.

“There is still a very long way to go in the championship and the gap is, of course, quite big, but we have seen and we know it can switch around quite quickly,” said Verstappen, who struggled in the opening three races of the year before taking the initiative.

In the back of his mind, Verstappen may have recalled that he had a 32-point lead over seven-time champion Lewis Hamilton of Mercedes at a similar point in the title race last year when their battle went down to the final lap of the season.

“I mean,” he added. “Race three (this year) I was 46 behind, so now we just need to stay calm, need to focus and we need to improve because we’re not the quickest.

“Last weekend, it looked good in the race. Now not so good. But we managed to win and that is a quality too and we just have to work together as a team to try and find little improvements.”

To add to the complexity of the championship scrap, the upcoming British Grand Prix at Silverstone (July 3) may see a resurgent challenge from Mercedes with Hamilton leading their charge at his and team-mate George Russell’s home race.

Hamilton said he was ‘ecstatic’ to be back on the podium in third place on Sunday when he produced a convincing drive without post-race grumbles about bouncing or ‘porpoising’, despite claiming his car was undrivable on Friday.

He acknowledged, however, that his car remains deeply capricious and unpredictable, suggesting that it remains likely Silverstone will witness another battle between Ferrari and Red Bull, with the Italian team keen to give vent to their frustrations.

Sainz admitted that he may have erred in not taking a softer tire to attack Verstappen at his pit-stop before the closing laps while Leclerc said he was twice stuck behind ‘DRS trains’ of slower cars.

In each case, they knew they had the speed to overtake but did not have the space or opportunity – a less likely frustration for them at the sweeping high-speed British track.

“Our pace was really good,” said Leclerc. “I got stuck in the traffic twice… It’s like this sometimes, but I hope it will be different at the next race – reliability permitting!”