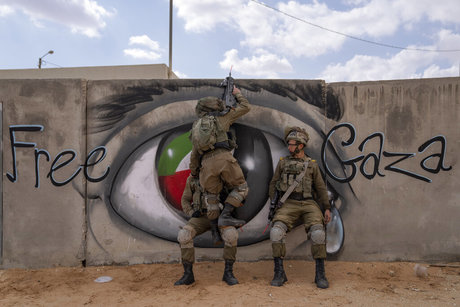 The Muslim call to prayer echoes through a remote town in southern Israel that has known only war.

Its 500 buildings, the tallest eight stories high, are deserted. Its narrow alleys are adorned with militant murals and posters honoring slain Palestinian fighters. It cannot be found on any map.

The military began building the $45 million facility in the Zeelim army base in 2005, toward the end of the second Palestinian intifada, or uprising, against Israeli rule. Over the previous five years, Israeli troops had battled Palestinian militants in cities and towns across the occupied West Bank and Gaza.

Since then, Israel has fought four wars in Gaza against the Islamic militant group Hamas, with some battles erupting in densely populated cities and refugee camps. Over 4,000 Palestinians have been killed, more than half of them civilians, according to the U.N. Israeli officials say 106 people have died on their side, including civilians, soldiers and foreign residents.

In each war, Israel has been accused of using disproportionate force in crowded residential areas, contributing to the civilian death toll. The military says it makes every effort to spare civilians, while accusing Palestinian militants of using them as human shields.

"The nature of war has changed," said Col. Eli Abeles, the facility's commander. "Today our principal fighting ... is done around built-up areas and in built-up areas."

The tight alleyways, drab concrete buildings and open areas in the roughly 60-acre (quarter square kilometer) facility are meant to simulate the urban environments in which Israel's soldiers often operate. These can include Gaza and the West Bank, as well as southern Lebanon, where Israel has warned potential future fighting with Hezbollah militants would likely take place.

Between exercises, soldiers rest in the shade of the buildings, smoking cigarettes beneath the faded posters, some of which honor those killed in battle with Israel. Others don red-and-white checkered scarves to role-play militants in an upcoming drill.

The training center can accommodate exercises for an entire brigade of 2,000 soldiers at a single time, Abeles said. Visiting American troops and forces from European allies — most recently Cypriot soldiers — have also trained in Mini Gaza.

But when the guns fall silent and the soldiers withdraw, the training center reverts to a ghost town, the wind howling through empty rooms and creaking metal.