Bread sold on black market in Nabatiyeh, queues in Sidon 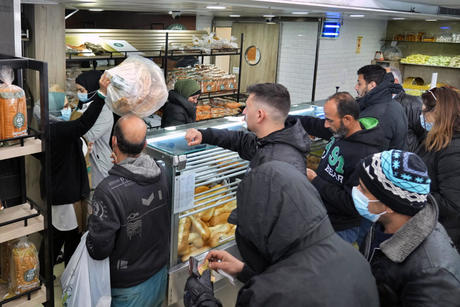 A number of bakeries stopped working in Sidon on Wednesday as they were running out of flour, media reports said, which caused citizens to queue in front of the open bakeries to obtain bread.

Meanwhile in Nabatiyeh, a bundle of bread was sold for LBP 25,000 - instead of 15,000 - on the black market, as companies could not deliver bread to the shops.

Nabatiyeh citizens were obliged to head to Sidon or Khaldeh to buy their bread, the reports added.

Lebanon is heavily reliant on wheat, corn and sunflower oil from Ukraine and Russia.

Bakeries that used to have many types of flat bread now only sell basic white pita bread to conserve flour.

A bread crisis has repeatedly threatened the Lebanese as the Central Bank failed to pay for wheat ships on time. The delay caused shortages and queues.

Although the bread is still subsidized, its price keeps on increasing due to the surge of the dollar exchange rate on the black market.

Wheat prices worldwide were also up 45% in the first three months of 2022 compared with the previous year, according to the FAO's wheat price index.

World production of wheat, rice and other grains is expected to reach 2.78 billion tons this year, down 16 million tons from the previous year — the first decline in four years, the U.N. Food and Agriculture Organization said.

Quit complying and eat "dignity", you got plenty of it. You can thank Hassan Na7srallah for this.