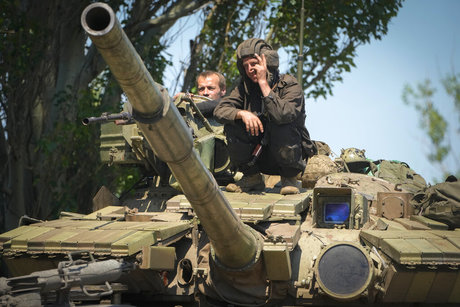 Here are the latest developments in the war in Ukraine:

The United States says its commitment to defend Russia neighbor and fellow NATO member Lithuania in the event of attack is "ironclad."

"We stand by our NATO allies and we stand by Lithuania," State Department spokesman Ned Price says, reiterating that an attack on the country would, under NATO rules, be considered "an attack on all" members of the alliance.

EU member Lithuania, which serves as a conduit for goods travelling between the Russian mainland to its east and Russia's Baltic Sea outpost of Kaliningrad to its west has drawn Moscow's ire by banning rail convoys of goods targeted by EU sanctions.

A Ukrainian official says Russian forces are "massively" shelling the eastern city of Lysychansk, one of two sister cities in the Lugansk region that are pivotal in the battle for Ukraine's industrial heartland of Donbas.

"They are just destroying everything there," Lugansk governor Sergiy Gaiday says. In a later statement, he says residents are being evacuated.

Lysychansk lies just across the Donets river from the ruined city of Severodonetsk, where the last remaining Ukrainian troops are holding out at a chemical plant while waiting for more heavy weapons to try to stall the Russians' advance.

Gaiday describes the situation in Severodonetsk as "hell" but assures: "Our boys are holding their positions and will continue to hold on as long as necessary."

Fifteeen people, including an eight-year-old child, were killed by shelling Tuesday in and around the northeastern city of Kharkiv, where Russian forces have stepped up their attacks a month after being routed from the city's northern outskirts.

"Fifteen people died and 16 were wounded. Such are the terrible consequences of Russian daytime shelling in the Kharkiv region," Kharkiv governor Oleg Synegubov says.

The deaths took place in the city of Kharkiv, Ukraine's second-biggest, as well as Chuguiv, a town 30 kilometres (18 miles) to the southeast and Zolochiv, 40 kilometres to the north.

"It's appalling that a public official in Russia would even suggest the death penalty for two American citizens that were in Ukraine," John Kirby, a White House spokesman, says.

He was reacting to an NBC News interview with Dmitry Peskov, in which he accused Alexander Drueke and Andy Huynh of being mercenaries and refused to rule out the possibility of them facing the death penalty.

Two British men and one Moroccan man were sentenced to death earlier this month by Moscow-backed separatists in southeast Ukraine for fighting alongside Ukrainian forces.