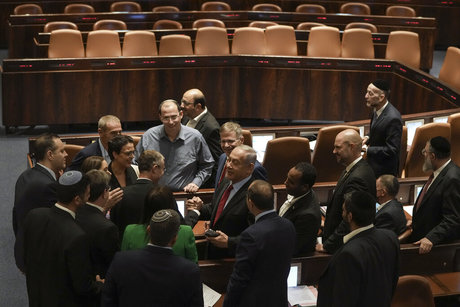 Israeli lawmakers voted in favor of dissolving parliament in a preliminary vote on Wednesday, setting the wheels in motion to send the country to its fifth national election in just over three years.

The motion was the first step in a series of votes before the formal disbanding of the government. It came two days after Prime Minister Naftali Bennett announced he was disbanding his unraveling governing coalition of eight ideologically diverse parties just over a year after he took office.

The historic coalition, which unseated longtime leader Benjamin Netanyahu, was wracked by infighting and defections in recent months. It included dovish parties committed to a two-state solution with the Palestinians, hawkish ultranationalists who oppose a Palestinian state, and a small Islamist faction, the first Arab party to join a government.

A series of proposals for dissolving parliament were passed by a vast majority of the 120 members of Knesset, the Israeli parliament. But a final vote on at least one of the motions is still required in order to dissolve parliament, and that is expected to be held next week.

Once it passes, Bennett will step down as prime minister and hand over the reins to his ally, Foreign Minister Yair Lapid. New elections are expected to be held in October.

Bennett and Lapid formed their coalition of parties united solely in their opposition to Netanyahu last year after four inconclusive elections in 2019, 2020 and 2021. Parliament was deadlocked between those who supported a Netanyahu-led government and those who refused to join forces with him while he was under indictment for corruption.

Netanyahu is on trial and faces charges of fraud, breach of trust, and accepting bribes in three high profile cases. He has denied any wrongdoing and has repeatedly dismissed the accusations as part of a witch-hunt to oust him from office.

Early opinion polls published Tuesday project that Netanyahu's Likud party will remain the largest in parliament, but a path toward forming a majority coalition remains unclear.