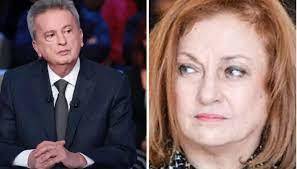 “Judge Ghadan Aoun is personally overseeing the search of the villa and counting its assets,” LBCI TV reported.

Another State Security patrol had overnight arrived outside Salameh’s residence to enforce a subpoena issued by Judge Aoun. The patrol arrived overnight as Salameh was on a live interview on LBCI television.

Al-Jadeed TV meanwhile reported overnight that Salameh has not visited his Rabieh residence for a “long time” and has been instead residing at another location for the past few months.

Judge Aoun had pledged in February that she "will continue to pursue Central Bank Governor Riad Salameh until he is brought to justice," after State Security agents raided his residences in Safra and Rabieh and the bank's headquarters in Beirut without managing to find him.

Salameh had failed to show up at several interrogation sessions.

In February, Salameh’s guards in each of Safra and Rabieh initially tried to prevent the State Security agents from entering the properties before letting them in after insistence.

The judge had issued the subpoena against Salameh on February 1 after he failed to show up for a third interrogation session in the lawsuit filed by the People Want to Reform the System group.

The judge has also issued a travel ban and an assets freeze against Salameh.

Salameh, one of the world's longest-serving central bank governors, is also facing judicial investigations in France, Switzerland and other European countries on suspicion of money laundering and illicit enrichment, among other allegations.

Salameh has dismissed the cases against him as unfounded and lacking in evidence, claiming they were opened based on complaints filed by Lebanese citizens "for reasons that could be political... or tied to certain interests."

He said that a top-tier financial audit firm had scrutinized his accounts at his request and presented him with a report that he then submitted to officials and judges.

"I am ready to cooperate with all investigations," he said, claiming they were based on "fabricated evidence" that made it seem as though he "took all of Lebanon's money and pocketed it."

more than that; she has been referred to a judicial disciplinary panel as well. Yet, she continues her vendetta unabated using State institutions; a Privilige only given to Aounis.

Ghada Aoun is the queen of Useful Idiots. Hizbollah is synonymous with criminal activities, drug/captagon trade, money laundering, illegal crossings for tax evasion, foreign funding of its militia, assassination squads, convictions in world court, and responsible for bankrupting and isolating Lebanon... and here is superwoman Aoun under Bassil orders focusing on prosecuting prominent Christians and Sunnis. Ghada and Bassil are disgusting evil traitors implementing criminal Iranian Guards agenda in taking over Lebanon. We'll make sure they will rot in Jail. Salameh is not a saint, however stabilizing currency for 20 years under incredible pollical risk from HizbIran deserves an Nobel price in economics and had a positive impact in hundred $billion to our economy, as Hizb occupation has a negative impact way over hundred $billion that explains why we are in hell begging for aid.