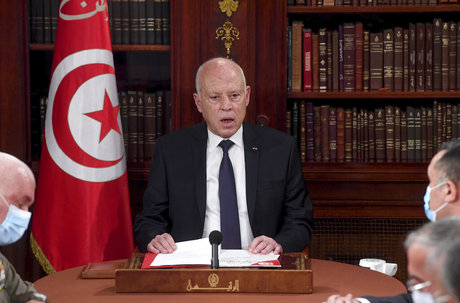 Tunisia's President Kais Saied is the target of "serious threats", the interior ministry said Friday, 11 months since the head of state staged a dramatic power grab.

"According to credible information and investigations still underway, the president of the republic and the presidency as an institution are the target of serious threats," spokeswoman Fadhila Khelifi told journalists.

"There is a plan by groups both at home and abroad to target the security of the president" and to "damage state security and create chaos" in the North African country, she said.

She did not provide more details on the threats or their origin.

"This is just to justify new arrests and to take revenge against his rivals," Chebbi told AFP.

"The president is politically isolated and is trying to stir up public sympathy."

Saied sacked the government and suspended parliament 11 months ago, later extending his powers over the judiciary and moving to change the constitution in decisive blow to the only democracy to emerge from the Arab Spring uprisings.

Some Tunisians have welcomed his moves against a system seen as corrupt and unable to tackle the country's deep social and economic issues.

But opponents, notably the Islamist-inspired Ennahdha party, have condemned his moves as a coup.