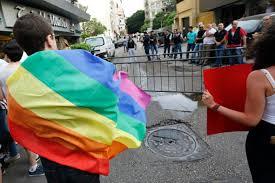 Lebanon's caretaker interior minister has given instructions to security forces to stop gatherings of the LGBTQ community, following pressure from religious institutions.

The orders followed "calls on social media to organize parties and events promoting homosexuality in Lebanon, and following communication from religious figures rejecting the spread of this phenomenon," he said.

Members of the LGBTQ community enjoy more freedom in Lebanon than in most other Middle East countries but still lack rights and face constant harassment.

"This phenomenon is contrary to the habits and customs of our society" and religious principles, Mawlawi said, adding that "personal freedoms cannot be invoked."

The move sparked anger and sarcasm on social media.

"What he (the minister) calls traditions and religious principles are inherited prejudices that repress the rights of thousands of citizens," lawyer Nizar Saghieh said.

LGBTQ events in Lebanon are often canceled, usually following pressure from religious authorities, and security forces are known to raid nightclubs and other locations frequented by members of the community.

In 2019, a top Lebanese music festival canceled a concert by Mashrou' Leila, arguably the country's best-known band, whose lead singer is openly gay.

Clerics had called for the cancellation of the concert in Byblos because some of the group's songs were deemed offensive to Christians.

Shameful discriminatory policy against a large portion of the population. Where are the freedoms of expression & of assembly ? In Europe & North America, the "civilized" and free world organize Gay Pride convoys & celebrations this week.