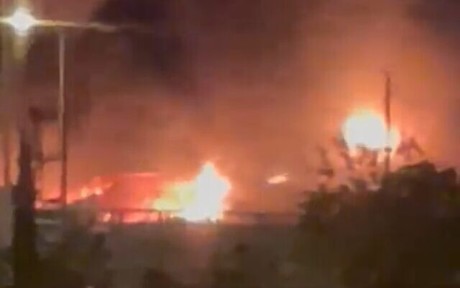 Israeli firefighters were on Sunday battling to control a huge blaze in the northern city of Haifa after a number of buildings containing hazardous materials caught fire overnight in an industrial and logistics complex, Israeli media reports said.

Explosions were heard, apparently as the flames detonated the contents of the building. Videos posted to social media showed flames engulfing the structures.

It was unclear what had been stored in the buildings, with some of the explosions appearing to produce light-colored flames.

No casualties were reported in the fire, but three people were rescued from nearby homes.

Firefighters were working to prevent the flames from spreading to nearby structures.

Haifa is a key location for Israeli industry, with a number of plants and processing centers linked to the oil and chemical industries.

Lebanon’s Hezbollah had in the past threatened to target chemical facilities in the city in the event of a future war.

Another chapter in the covert war...