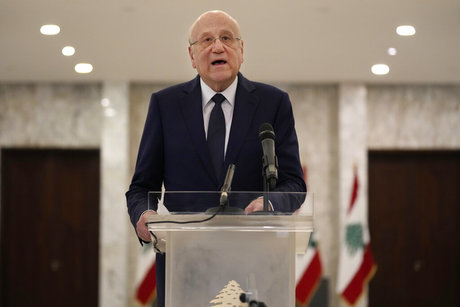 Prime Minister-designate Najib Mikati kicked off Monday his non-binding consultations with the parliamentary blocs over the shape of the new government.

"Our stance is clear on the need form a government as soon as possible," the bloc's MP Ali Hassan Khalil announced after the meeting.

"We must benefit from the time separating us from the presidential juncture and must focus on approving the financial recovery plan," he added.

MP Mohammed Raad of Hezbollah's Loyalty to Resistance bloc meanwhile said that his party has no "veto" on the participation of political rivals in any new government.

"We did not describe the shape of the government but we stressed that it should be an active government," Raad added.

The National Moderation bloc of Akkar meanwhile asked Mikati to be represented in the government, arguing that it represents "half of North Lebanon."

MP Michel Mouawad of the North of Confrontation bloc for his part warned that "continuing with national unity governments would be a continuation of corruption."

"Any reference in the ministerial statement to the army-people-resistance equation would link the fate of the Lebanese state to Hezbollah," he cautioned.

And as independent MP Ghassan Skaff called for an "emergency government," the al-Ahbash bloc called for a "real salvation government."

"We call on PM-designate Mikati to form a mission-oriented government that comprises competent figures, so that it works on the negotiations with the IMF with the highest possible competency," Jamaa Islamiya's MP Imad al-Hout for his part said.

He will meet with the rest of the blocs and MPs on Tuesday.

Mikati was named PM-designate on Thursday with 54 votes, as former Lebanese ambassador to the U.N. Nawaf Salam received 25 votes and 46 MPs abstained from naming any candidate.

The country’s two main Christian blocs – led by the Lebanese Forces and the Free Patriotic Movement – were among those who did not nominate any candidate.

In a televised address that followed his designation, Mikati said “we must all cooperate to rescue our country and people,” while noting that his hand is extended to “everyone without exception.”

“The chances are still available to rescue what should be rescued,” Mikati noted, calling on the political forces to put their differences aside.

“We no longer have the luxury of time and we have wasted enough time,” the PM-designate warned, cautioning against “drowning in conditions and demands.”

“We are now before the challenge of full collapse or gradual salvation,” Mikati went on to say, adding that the government must “cooperate with parliament to pass the needed reforms.”