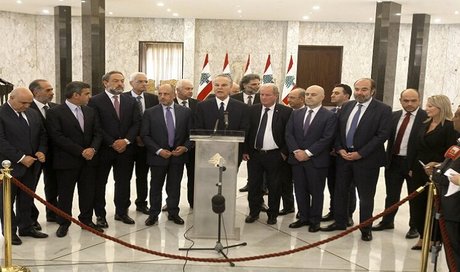 The Lebanese Forces-led Strong Republic bloc announced Monday that it will not take part in the new government that the PM-designate Najib Mikati intends to form.

“We will not take part in the government, seeing as the conditions we have announced cannot be implemented in the last three months of this (presidential) tenure,” MP George Adwan said on behalf of the bloc, after meeting Mikati as part of the non-binding parliamentary consultations.

“Our conditions would be represented in a government that would restore the state’s decisions in all matters, because with such a government restoring ties with the foreign countries becomes possible,” Adwan added.

Stressing that “no ministerial portfolio should be exclusively allotted to a certain sect or party,” the MP emphasized that any new government should not be a “mini-parliament” because that would prevent accountability.

“We hope parliament will elect a new president for the republic as soon as possible, because then it would be possible to implement all the conditions that we mentioned,” Adwan added.

Asked about the so-called army-people-resistance equation, the MP said: “Our equation is people-state-army.”

Smart and correct decision! Hopefully position adopted at all sovereign MPs and politicians.