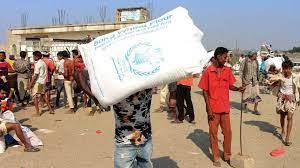 The UN's World Food Program has announced further reductions of food aid to war-torn Yemen as a result of funding gaps, price rises and the fallout from the Ukraine war.

"Critical funding gaps, global inflation and the knock-on effects of the war in Ukraine have forced WFP in Yemen to make some extremely tough decisions about the support we provide to our beneficiaries," the food aid program tweeted Sunday.

As a result, it said, it had to drastically scale back assistance for 13 million Yemenis who receive emergency food aid in the country that the UN says is facing the world's worst humanitarian crisis.

"Resilience and livelihood activities, and school feeding and nutrition programs will cease for four million people, leaving assistance available for only 1.8 million people," it added.

Yemen's seven-year conflict has killed more than 150,000 people and displaced millions of civilians, according to the UN.

Warring parties in the impoverished country renewed earlier this month a two-month truce that began in April and that aid agencies and Western governments say has significantly reduced fighting.

But the U.N. humanitarian coordinator for Yemen, David Gressly, previously warned that the humanitarian situation is worsening in the country, saying almost three quarters of the population is in need of assistance.

"WFP is acutely aware of the devastating impact of the cuts on Yemen's poorest and most needy families and we do not take their plight lightly," the U.N.'s food aid arm added.

Yemen's conflict broke out in 2014, when Iran-backed Huthi rebels seized the capital Sanaa, prompting a Saudi-led coalition to intervene the following year to prop up the internationally-recognized government.

The already food insecure country is particularly vulnerable to spiraling global food and energy prices as a result of Russia's invasion of Ukraine in February.