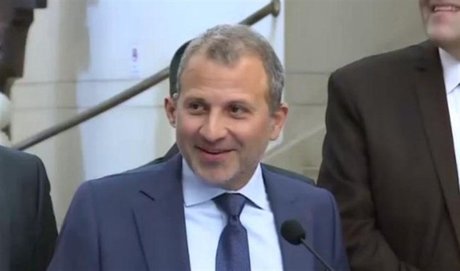 Free Patriotic Movement chief Jebran Bassil announced Tuesday that the FPM’s participation in the new government would depend on its line-up and program, as he called for a “comprehensive or partial rotation of ministerial portfolios.”

“We wished the PM-designate success and stressed to him that we want a speedy government formation,” Bassil said after meeting PM-designate Najib Mikati along with the Strong Lebanon bloc, as part of the non-binding consultations to form a new government.

“We don’t support any idea about keeping the (caretaker) government as it is -- without powers or with incomplete powers,” Bassil added.

“We told the PM-designate why we have not supported his designation… There is a real problem today about the designation’s non-conformity to the National Pact, which we told him about, but we also told him that we will rise above this problem because of the situation in the country,” the FPM chief went on to say, referring to the fact that only a small number of Christian MPs have endorsed Mikati’s nomination.

Moreover, Bassil said that, in principle, the FPM does not have “a desire to take part in the government,” but added that “this issue will be discussed in the bloc’s meeting this afternoon.”

“Participation also hinges on several issues, including the cabinet’s line-up and its program,” he noted.

Bassil also mentioned pending issues, such as the investigations targeting the central bank governor and the issue of the Beirut port blast investigations.

“We stressed to the PM-designate that we do not have demands or conditions, neither about numbers nor about portfolios and candidates,” the FPM chief added.

“We told him that everything that is being mentioned in the media in this regard is lies and untrue claims,” he said.

Bassil, however, hoped that there will be “a comprehensive or partial rotation of portfolios.”

“A comprehensive one would be better, and no portfolio should remain with a certain sect or political group,” Bassil stressed.

He also said that the government should not be formed on the basis that there will certainly be a presidential vacuum.

Moreover, Bassil said that, in principle, the FPM does not have “a desire to take part in the government,”

How selfless can he be?!! However; he wants to name ministers and demands the Justice, Foreign, and Defence ministries.

Knowing of Hezballah/Amal insistence on the Shi3as hold onto the Finance portfolio, Bassil urges portfolio rotation so he can demand he keeps the Energy file.

Why aren’t people taking his kids hostage yet ? They’re happily living on the money their father stole from us.