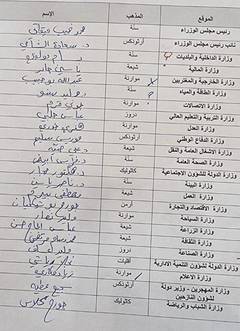 The sources told al-Joumhouriah newspaper, in remarks published Friday, that Aoun did not reject the draft but rather promised to study it.

"There is no doubt that Aoun will have some remarks and that he might request some amendments,” the sources said.

Al-Akhbar newspaper, for its part, reported Thursday that Aoun was not comfortable with Mikati's step and that the Free Patriotic Movement was furious that Mikati has renewed the terms of most current caretaker ministers with the exception of caretaker Energy Minister Walid Fayad.

In a leaked document of the draft line-up handwritten by Mikati, most caretaker ministers were listed to be ministers in the new government except for Fayad, caretaker Finance Minister Youssef Khalil, caretaker Minister for the Displaced Issam Sharafeddine and caretaker Economy Minister Amin Salam.

Media reports said, that the line-up has the support of Speaker Nabih Berri who approved the appointment of Jaber instead of Khalil. It also has the approval of Progressive Socialist Party leader Walid Jumblat, the Tashnag party and new parliamentary blocs like the Akkar bloc. The report added that Hezbollah will most likely approve it as well and that the reshuffle between the sects was convenient to all parties, except to the FPM.

One shouldn't try to mix sects and politics.

One of your best comments to-date. Keep adding value...!