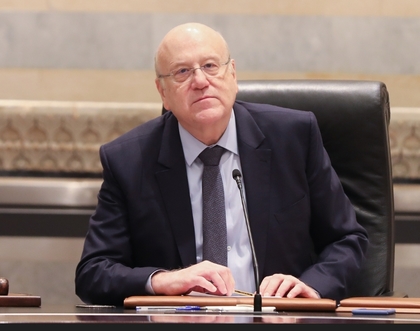 Prime Minister-designate Najib Mikati on Thursday made new suggestions related to the financial recovery plan, which some MPs have considered to be a “new plan,” al-Jadeed TV reported.

In a meeting with the finance parliamentary committee, Mikati proposed the creation of “a recovery fund for returning a part of the bank deposits” to depositors, the TV network added.

“These suggestions do not violate the preliminary agreement with the International Monetary Fund, and the MPs asked him to draft these suggestions and refer them to parliament,” al-Jadeed said.

MPs also quoted Mikati as saying that “every day that passes without approving the plan and signing the deal with the IMF costs us a daily loss estimated at $25 million.”

No recovery without ending Iranian occupation and disarming the criminal HizbIran. Otherwise, the only fund needed is for educated and productive people to emigrate! Time to say the truth and stop hiding head in the sand, Mr. Vichy government!