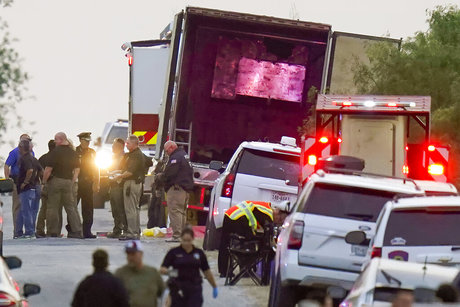 The combination of heat and humidity would have quickly created life-threatening conditions inside the packed, un-air-conditioned tractor-trailer where dozens of immigrants were found dead, an expert said.

Although it's unclear how long the people had been inside the trailer, it likely would only take an hour or less for temperatures to climb as high as 125 degrees (51 Celsius) or hotter, said Jennifer Vanos, an assistant professor in climate and health at Arizona State University who has studied child deaths in cars.

The death toll rose to 53 on Wednesday, two days after the tractor-trailer — packed with 67 people — was found abandoned on the edge of San Antonio, marking the nation's deadliest smuggling episode on the U.S.-Mexico border.

WHAT MADE THE SITUATION SO DANGEROUS?

The tractor-trailer likely would have been hot – perhaps 105-110 degrees – when people got in because the outdoor heat and humidity already were high, Vanos said.

Once inside, their bodies would have created even more heat and humidity, and because there was no air flow, their sweat could not evaporate to cool their bodies and they would dehydrate quickly. The immigrants did not have water.

"All those things together are going to drive a quicker heat death," Vanos said.

It can take less than one hour for a car left in the sun to heat up from air-conditioned temperatures to 125 degrees, partly because windows create a greenhouse effect, said Vanos. Though the tractor-trailer was windowless, the temperature inside could have reached 125-130 degrees fairly quickly because of the number of people and because the trailer would have continued absorbing heat from the sun, she said.

It's unclear when or where the migrants boarded the truck, but Homeland Security investigators believe they got on near or in Laredo, on U.S. soil, about two hours from San Antonio, U.S. Rep. Henry Cuellar told The Associated Press Wednesday. It's also unclear how long the trailer was sitting in San Antonio.

HOW LONG COULD THEY HAVE SURVIVED?

That depends on their health and other factors, including age, medications and their clothing, Vanos said.

Some people also might have died of renal collapse, especially if they had existing kidney disease, because the lack of water led to dehydration, she said.

Some of the more than a dozen people transported to hospitals were suffering from injuries such as brain damage and internal bleeding, according to Rubén Minutti, the Mexico consul general in San Antonio. Several people died at the hospital. Vanos said that indicates their body couldn't regulate its temperature and the organs were already failing.