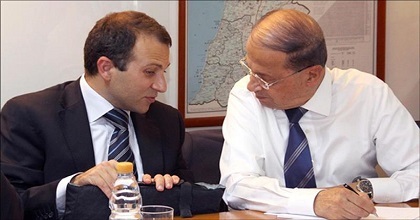 The Kuwaiti al-Anbaa newspaper said that according to its sources, Bassil will not stand still while the energy portfolio is being taken away from the FPM, while Hezbollah thinks that "a short-term Cabinet is not worth all the tension."

The sources said that Bassil's refusal to accept the line-up will be met with a strict political response. The daily reported a possibility of holding early Presidential elections.

The sources added that Aoun will officially respond to Mikati on Monday or Tuesday. "Unless he decides to reject the line-up, then he will postpone the response until after the Adha holidays."

When will the Lebanese PM-designate understand that he has fulfilled his undertaking in compliance with the constitution by discussing the new cabinet with President Aoun.
His next step should legally be to present his cabinet to Parliament. If it is not accepted there, then there must be new elections. If one of the proposed ministers does not like the position he has been given, he can simply resign. If a party does not like the positions it has been give, or not give, then it can form part of the opposition.
There is a reason that the person in charge is called the PRIME MINISTER.