Germany, Nigeria to sign accord on return of Benin Bronzes 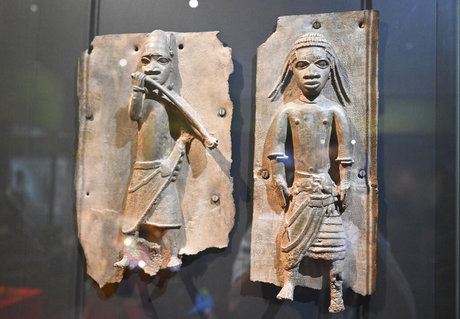 Germany and Nigeria are set to sign an agreement in Berlin Friday paving the way for the return of centuries-old sculptures known as the Benin Bronzes that were taken from Africa in the 19th century and displayed in German museums and elsewhere.

Governments and museums in Europe and North America have increasingly sought to resolve ownership disputes over objects that were looted during colonial times.

A British colonial expedition stole the bas-relief Bronzes along with a vast number of other treasures in 1897 from the royal palace of the Kingdom of Benin, in what's now southern Nigeria.

The Prussian Cultural Heritage Foundation, an authority that oversees many of Berlin's museums, announced last year that it was beginning formal negotiations on returning pieces that are in its collection. Many of them date from the 16th to the 18th centuries.

The memorandum of understanding will be signed by German Foreign Minister Annalena Baerbock and Culture Minister Claudia Roth, as well as Nigeria's Culture Minister Lai Mohammed and Minister of State for Foreign Affairs Zubairo Dada.

Final details of the restitution have yet to be announced, but the Prussian Cultural Heritage Foundation says it expects to keep some of the Bronzes on loan from Nigeria.

The Smithsonian removed 10 Benin Bronze pieces from display at its National Museum of African Art in Washington, D.C., and announced a new ethical return policy this year. Other U.S. museums have also begun discussions about returning such objects, while France declared last year that it would return the so-called Abomey Treasures to Benin as part of a wider effort to make amends for colonial wrongs.

Many of the objects remain in the British Museum, which has resisted calls to return them.