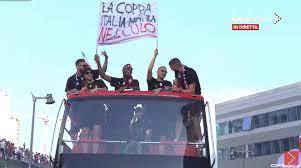 A group of AC Milan players were fined by the Italian Football Federation on Friday for insulting local rivals Inter Milan during their Serie A title parade.

Sandro Tonali, Theo Hernandez and Mike Maignan were ordered to pay 4,000 euros ($4,164) and Rade Krunic 5,000 euros for a variety of offences considered against "the principles of integrity, honesty and correctness."

These include holding up a banner on the open top bus travelling through Milan on May 23 which read "you can stick the Italian Cup up your a***".

Inter won the cup last season but conceded the league title to Milan on the final day of an enthralling Scudetto race.

Milan were also fined 12,000 euros for the offenses.