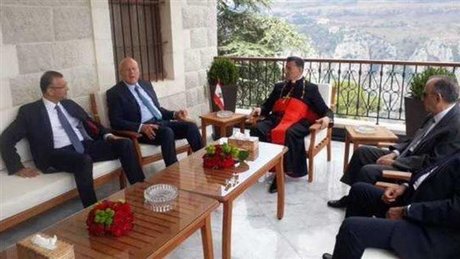 Prime Minister-designate Najib Mikati announced Saturday that he is "ready to amend" the cabinet line-up he has submitted to President Michel Aoun, while stressing that he will not trigger a clash over the finance portfolio seeing as the newbgovernment's term will be short.

"No political party is seeking obstruction, I hope that the government will be formed," Mikati said after meeting Maronite Patriarch Beshara al-Rahi in Diman.

"I have sent a line-up to President (Michel) Aoun and consultations are still ongoing," he added.

Rejecting the presence of ministerial portfolios that permanently remain with certain "figures," Mikati stressed the country "cannot continue to function this way."

I reject the "this is mine and this is yours" approach, the PM-designate added.

Noting that he does not mind amending the line-up he has submitted to Aoun, Mikati reassured that any cabinet line-up will respect equal power-sharing between Christians and Muslims.

The PM-designate also revealed that he has obtained "encouraging" information about the sea border demarcation talks, adding that Lebanon is awaiting the official Israeli response to its latest proposal.