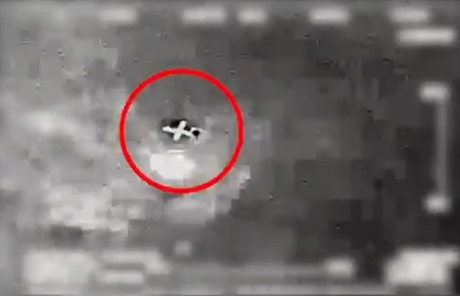 The Israeli army on Saturday said it intercepted three drones launched by Hezbollah from Lebanon that were headed towards an offshore gas field in the Mediterranean, an announcement that was later confirmed by Hezbollah.

"Three hostile drones approaching the airspace in Israel's economic waters have been intercepted," the army said in a statement, adding that the drones were headed towards the Karish gas field.

The drones were shot down by a fighter jet and a navy missile ship, the Israeli army added.

It added that an initial inquiry suggests that "the UAVs did not pose any imminent threat."

Noting that "the UAVs were intercepted over the Mediterranean Sea," the Israeli army added that "the detection and alert systems functioned as required."

"This embodies the concept of multi-layered air defense in the best possible manner in unison with the professional activities of the soldiers at sea and in the air who successfully carried out the defensive mission," the Israeli army boasted.

The drones were not armed and did not pose a risk, Israeli military sources said.

One drone was intercepted by a fighter jet and the other two by a warship, the sources added.

In a statement, Hezbollah said it launched "three unarmed drones" towards "the disputed area in the Karish field for reconnaissance missions."

"The mission was accomplished and the message has been sent," it added, without mentioning any Israeli interception.

Israeli Defense Minister Benny Gantz earlier said that "Hezbollah is undermining the Lebanese state's ability to reach a sea border agreement," warning that Israel "has the right to respond to any harm attempt."

Israel claims that the field lies in its waters and is not part of the disputed area subject to ongoing negotiations on the maritime border.

Hezbollah warned Energean against proceeding with its activities.

Lebanon and Israel resumed negotiations on their maritime border in 2020, but the process was stalled by Beirut's claim that the map used by the United Nations in the talks needed modifying.

Israel fought a devastating war with Hezbollah in 2006 and regards the Iran-backed group as one of its principal enemies.

Can we know if the 3 drones were weaponized or if they were surveillance drones? Were the drones still in the Lebanese waters ?

Hezbollah claimed responsibility for the three drones shot down by Israel, saying they were "unarmed" and that they have sent the needed "message" to Israel.

What was that needed message, eh Hassan? "we have three less drones than we had earlier in the day and don't you forget it!"

Failure is not success.

Being bested by one's self-chosen enemy is weakness.

Repeating what is false is a fool's errand.

The sending of the three drones, armed or not, only goes to prove one thing.
Even/when Lebanon and Israel reach agreement on the maritime border, it will not be accepted by Hizballah and they will continue with their opposition and provocation.

Are we getting stupider by the day. After elections returning same politicians and Shia electing Hizb exclusively haven't we not become the joke of the world? even those who care ca justify helping us anymore! Wake Up! HizbIran has bankrupted and isolated Lebanon but done nothing to help us. We've never been less secure, less respected, less democratic, less porous borders, less poor and less civilized. Israel build a wall to keep us away and international court will give us better marine border demarcation that Hizb ever will. Hizb can't get Shebaa from Syria or protect our northern maritime borders. Time to divide Lebanon like Czechoslovakia and liberate Lebanon from the basij so we can put all traitors and corrupts in prison before it is too late to save Lebanon.