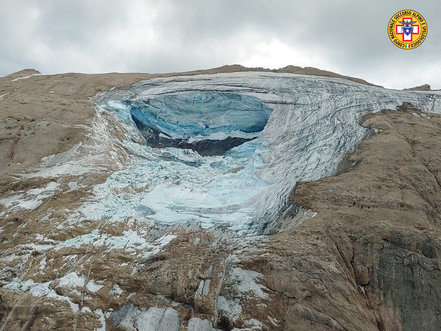 Rescuers used thermal drones Monday to search for possible survivors trapped under ice after an avalanche set off by the collapse of the largest glacier in the Italian Alps killed at least six people and injured eight others.

Authorities said they did not know how many climbers were hit when the glacier gave way Sunday on Marmolada, the highest mountain in the Italian Dolomites.

The disaster struck one day after a record-high temperature of 10 degrees Celsius (50 degrees Fahrenheit) was recorded at the glacier's summit.

Emergency services spokeswoman Michela Canova told AFP an "avalanche of snow, ice and rock" hit an access path at a time when there were several roped parties, "some of whom were swept away".

The total number of climbers involved was "not yet known", she said.

Helicopters and sniffer dogs were called off as night fell and amid fears the glacier may still be unstable.

"It is difficult for the rescuers in a dangerous situation", he said.

Images of the avalanche filmed from a refuge close by show snow and rock hurtling down the mountain's slopes.

"It's a miracle we're alive," Stefano Dal Moro, an engineer who was hiking with his Israeli partner told Corriere della Sera.

"There was a dull noise, then that sea of ice came down. It's useless to run, you can only pray that it doesn't come your way.

"We crouched down and hugged each other tightly as the ice passed".

Bodies dug out of the ice and rock were taken to the village of Canazei.

Massimo Frezzotti, a science professor at Roma Tre University, told AFP the collapse was caused by unusually warm weather linked to global warming, with precipitation down 40 to 50 percent during a dry winter.

"The current conditions of the glacier correspond to mid-August, not early July," he said.

The Trento public prosecutor's office has opened an investigation to determine the causes of the tragedy.