Lebanon on Hezbollah drones: Any act outside state responsibility is unacceptable, dangerous 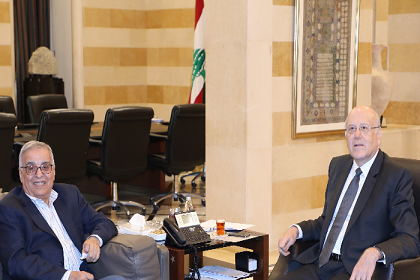 The Lebanese state on Monday distanced itself from the drones that Hezbollah sent Saturday towards the Karish offshore field, saying “any act outside the state’s responsibility” is “unacceptable” and dangerous.

The statement was issued by Prime Minister-designate Najib Mikati’s office after the premier met with caretaker Foreign Minister Abdallah Bou Habib, who is close to President Michel Aoun.

The statement said Mikati and Bou Habib tackled “the situation in the South, the issue of the three drones that were launched in the vicinity of the disputed maritime area, and the reactions they stirred regarding the usefulness of this operation, which occurred outside the state’s responsibility and the diplomatic course, especially that the ongoing negotiations have reached advanced stages.”

“In this regard, Lebanon reiterates its support for the efforts of the U.S. mediator in order to reach a solution that would fully and clearly preserve the Lebanese rights,” the statement added, while calling for “speeding up the pace of the negotiations.”

“Lebanon considers that any act outside the state’s responsibility and the diplomatic course of the negotiations is unacceptable and would subject Lebanon to dangers that it can do without,” the statement went on to say.

Apparently addressing Hezbollah, the statement called on “all parties” to “show a spirit of high national responsibility and abide by what was previously declared as to that everyone, without exception, are behind the state in the negotiations process.”

“Lebanon also renews its demand for halting the continuous maritime, territorial and aerial Israeli violations of its sovereignty,” the statement added.

The statement comes a day after Bou Habib announced that he met with U.S. Ambassador to Lebanon Dorothy Shea, who conveyed to him U.S. objection against Hezbollah’s launching of the drones.

U.S. mediator Amos Hochstein has also held phone talks with Deputy Speaker Elias Bou Saab, demanding clarifications over Hezbollah’s move and warning that “the launching of the drones could halt the negotiations and affect the positivity that engulfed the latest talks,” media reports said.

But Bou Habib revealed that the U.S. ambassador was optimistic about the possibility of reaching an agreement, saying the talks have reached a “very advanced stage.”

And noting that Lebanon is yet to receive a written response from the Israelis, Bou Habib emphasized that Lebanon is “clinging to the 860 square kilometers and wants the entire Qana field.”

On Saturday, Israel's army said it had intercepted three drones launched by Hezbollah that were headed towards an offshore gas field in the Mediterranean, near a disputed area that is the subject of U.S.-mediated maritime talks.

"Hezbollah is continuing on the path of terrorism and is hurting Lebanon's ability to reach an agreement on a maritime border," Lapid said.

Hezbollah confirmed it had launched the drones, saying their “reconnaissance” mission was aimed at sending a “message” to Israel, while noting that the area the drones had been headed for is “disputed.”

Israel and previous United Nations maps put Karish within Israel's maritime borders, and not in the disputed area subject to ongoing negotiations.

Hezbollah at the time warned Energean against proceeding with its activities.

Lebanon and Israel resumed indirect negotiations on their maritime border in 2020, but the process was stalled by Beirut's claim that the map used by the U.N. in the talks needed modifying.

Lebanon initially demanded 860 square kilometers of waters it said were under dispute, but then asked for an additional 1,430 square kilometers, including part of the Karish field. However, in the latest talks with Hochstein, Lebanon renounced the so-called Line 29, instead demanding Line 23 and the entire Qana field.

Both of these clowns know that hezbollah is the State!

and neither would be in his current job if it were not for hezbullah:)

Oh yeah... so what you gonna do about it? Nothing absolutely nothing, Instead of sitting there and paying lip service, what don't you call a spade a spade. Everyone and their mother know the head of the snake is in Tehran. You need to galvanize the world to cut it off and then Lebanon will be free. And oh by the way stop this nonsense of "Strategic defense" show talks. All of you know it won't lead to anything.

Thank God that Christians like you have a special place in the Lebanese Constitution (Article 24, which assigns half of legislative seats to Christians).

HizbIran belongs in Iran and is becoming more isolated.

Dear Mr. President. Talk as much as you want, but please remember the famous saying in English - ACTIONS SPEAK LOUDER THAN WORDS - Do something about it.