Lapid: Lebanese govt. must rein in Hezbollah or we will do so 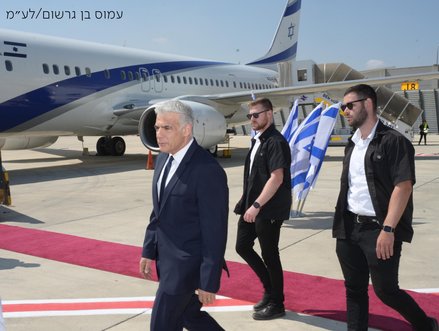 The Lebanese government “needs to rein in Hezbollah” or else Israel “will be forced to do so,” Israeli Prime Minister Yair Lapid warned on Tuesday, as he headed to France for an official visit.

"Israel will not agree to this kind of attacks on its sovereignty, and anyone who does this needs to know that they are taking an unnecessary risk to their well-being," Lapid added, in reference to Hezbollah's launching of three drones towards the Karish offshore gas field on Saturday.

“The Lebanese government must guarantee that Hezbollah will not obstruct the finalizing of the demarcation of the maritime border between Israel and Lebanon,” Lapid said.

He added that he will tell French President Emmanuel Macron that “Hezbollah represents a threat to Lebanon’s stability and safety.”

Speaking before his departure from Tel Aviv, Lapid said he will raise the issue of Hezbollah's drones with Macron.

"We will also discuss of course what has occurred recently off the coast of Lebanon," Lapid said.

"There have been repeated attacks on Israeli gas rigs. Israel will not accept this type of attacks on its sovereignty," he added.

Israel and Lebanon resumed negotiations on their maritime border in 2020 and the Karish site is marked as Israeli on previous United Nations maps.

The U.S.-backed talks have been stalled by Lebanon's demand that the U.N. maps must be modified.

Hezbollah's backers Iran will also be on the agenda at the bilateral talks in Paris, as Israel stands firmly opposed to international efforts to revive a nuclear accord with Tehran.

Israeli officials fear that giving Iran sanctions relief in exchange for curbs on its nuclear program could allow Tehran to boost funding to Hezbollah, as well as the Palestinian militant group Hamas.

A senior Israeli official said the Lebanon gas issue will be high on agenda during talks at the Elysee Palace in Paris.

"We will ask France to intervene to secure the negotiations that we want to lead until the end of the gas issues," the official told journalists traveling with Lapid.

Lapid's Paris visit comes days ahead of U.S. President Joe Biden traveling to Israel and the Palestinian territories, before flying to Saudi Arabia for energy talks.

France is a key supporter of Lebanon, a former French protectorate, and Macron has unsuccessfully tried to broker a solution to Lebanon's political crisis.

What does the 1943 map show. The map where Lebanon existed before they drew Israel.

The border should be straight. Simple. It is diagonal now because of decades of corruption which polititans got paid off to do ignore these things.

Not only does the entire Karish field belong exclusively to Lebanon, but so does the Leviathen and Tamar which are originally Lebanese territory since 1943 and it's independence. This whole thing is because of 80 years of corruption.

Please do so Israel.
Our people are incapable or unwilling to get rid of this Cancer!