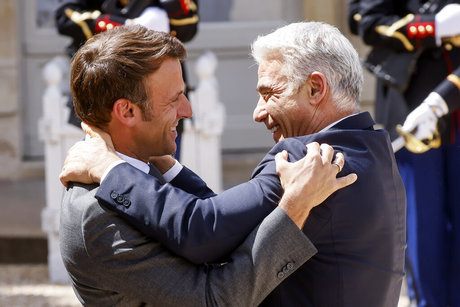 Israeli Prime Minister Yair Lapid on Tuesday accused Hezbollah of “jeopardizing stability in the region” and warned that Israel “will not stand idly by in the face of any attacks,” three days after the Iran-backed party launched three drones towards the Karish offshore gas field.

“We will not turn a blind eye to Iran's arming of Hezbollah with missiles and drones,” Lapid added at a joint press conference with French President Emmanuel Macron following talks at the Elysee.

"Hezbollah is a terrorist organization threatening Israel," he said, adding that Hezbollah was "trying to attack us with Iranian rockets."

Macron for his part called for “avoiding any activities that jeopardize the negotiations” between Lebanon and Israel over the demarcation of their maritime border.

“Lebanon's stability is key to the stability of the region,” Macron stressed.

Israel and Lebanon resumed indirect negotiations on their maritime border in 2020 and the Karish site is marked as Israeli on previous United Nations maps. The U.S.-backed talks stalled after Lebanon demand said that the U.N. maps must be modified.

"We will ask France to intervene to secure the negotiations that we want to lead until the end of the gas issues," an Israeli official told journalists traveling with Lapid.

France is a key supporter of Lebanon, a former French protectorate, and Macron has unsuccessfully tried to broker a solution to Lebanon's political crisis.