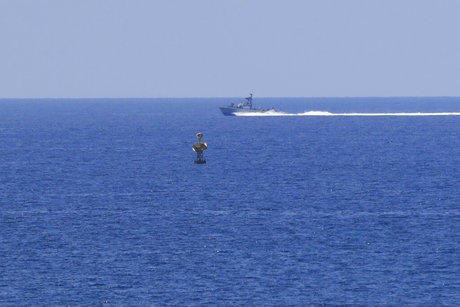 President Michel Aoun had said overnight that the negotiations “will be finalized soon” and that "the solution will satisfy everyone."

Israel and Lebanon resumed indirect negotiations on their maritime border in 2020 but the U.S.-backed talks stalled after Lebanon demanded that the U.N. maps be modified.

The reports about progress come despite high tensions in recent days linked to Hezbollah’s sending of drones towards the Karish offshore gas field.

And obviously Hezbollah will consider this another divine victory, this time thanks to the three Iran-sponsored drones that scared the sh.t out od the Israelis who then gave in to Nassys demands.

After bankrupting Lebanon, spending our reserve, destroying our reputation, accumulating debts and interests from default, and stealing the future of our kids; now corrupt Bassil and criminal HizbIran are looking for gas fields to fill their pockets and buy influence and allegiance. Hizb could then pay Iran's Basij for the rockets and arms it gets so it can destabilize more neighboring countries... Bassil/Aoun and Hizb are a malignant cancer. Hopefully no maritime border agreement before we get rid of this criminal mafia.