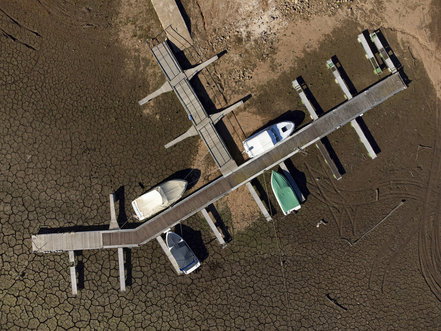 Portugal is bracing for a heat wave, with temperatures in some areas forecast to climb as high as 43 C (109 F) this weekend just as a severe drought grips the country.

The Civil Protection Agency, a Portuguese government body that coordinates official responses to emergencies, said Thursday it is placing crews on high alert because of the risk of wildfires. About a third of the country faces an extreme risk of forest fires, authorities say.

The high temperatures are forecast to last at least a week. The national weather service IPMA says what it calls "tropical nights," when temperatures stay above 20 C (68 F) after sunset, are likely.

The hot spell comes as much of Portugal endures a drought. At the end of June, 96% of the country was classified as being in either "extreme" or "severe" drought — the two highest categories.

The weather service says that over the nine months since last October rainfall was just over half the average for the period and was the second-lowest since 1931, when reliable national records began.

Heat waves and droughts aren't uncommon in Portugal, but climate scientists say all of southern Europe can expect higher temperatures and lower rainfall as a consequence of global warming.

As extremely dry weather hits Mediterranean nations, the European Union's executive said Thursday the continent faces one of its hardest years when it comes to natural disasters like droughts and wildfires because of increasing climate change.

June was also very dry in Spain, which is Portugal's neighbor on the Iberian Peninsula, with rainfall at about half the 30-year average and reservoirs on average at 45% capacity — 20 percentage points below the 10-year average, according to government data.

Italy recently endured a prolonged heat wave and is experiencing its worst drought in 70 years.