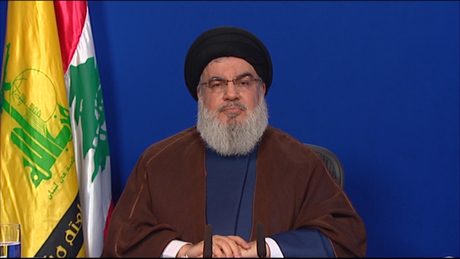 Hezbollah chief Sayyed Hassan Nasrallah on Wednesday announced a new equation resembling his famous “beyond, beyond Haifa” slogan during the 2006 war, threatening to “flip the table on the entire world” if Lebanon does not get allowed to benefit from its offshore oil and gas resources.

“For the first time in the history of the Zionist entity, the resistance launched three drones at the same time and towards the same target, and we have the ability to send armed drones of various sizes and with bigger numbers,” Nasrallah said in a televised speech, referring to Hezbollah’s sending of three unarmed drones towards the Israeli-operated Karish gas field ten days ago.

Addressing both “enemies and friends,” Hezbollah’s chief said he is “not waging a psychological war.”

“We are serious and this path is the only path to rescue the state. If we continue in this manner, we are heading towards what’s worse than war,” he added.

Noting that there are sides that want to “destroy the country” and to “see people standing in queues and killing each other out of hunger,” Hezbollah’s leader said “threatening with war and going to war would be more honorable than what the enemy wants for us.”

"If we go to war, we might impose our conditions on the enemy," Nasrallah said

“If you don’t allow (international) companies to extract oil (from Lebanon’s offshore fields), we will flip the table on the entire world,” he threatened.

“I tell the Zionist enemy and the Americans that the drones message is a modest beginning for what we might go to,” he warned.

"If the objective is to prevent Lebanon from extracting oil and gas, no one will be able to extract gas and oil nor to sell gas and oil, no matter the consequences," he went on to say.

Moreover, Hezbollah’s secretary general stressed that “the resistance is the only strength that Lebanon possesses to extract gas and oil.”

“Hundreds of billions of dollars can be secured from the offshore gas in order to rescue Lebanon,” he noted.

“There is a golden chance in these coming two months, in light of the U.S.-European need for gas,” Nasrallah said, warning that “Lebanon has the ability to obstruct the sale of gas to Europe.”

Addressing Lebanese officials, Nasrallah stated: “Do not allow the Americans to deceive you and pass time. You should obtain your rights before September, or else things will become more difficult.”

Referring to U.S. energy envoy Amos Hochstein, Nasrallah said “the so-called U.S. mediator is not a mediator but rather a party and he is working for the Israelis.”

“What brought Hochstein on his latest visit (to Lebanon) are two things -- the urgent need to secure an alternative to the Russian gas and the resistance’s serious threats,” Nasrallah boasted.

“We said that we will not stand idly by, we are following up on the developments and we have the right to make any step at any time,” he stressed.

Nasrallah also refrained from directly commenting on the statement issued by caretaker PM Najib Mikati and caretaker Foreign Minister Abdallah Bou Habib that criticized Hezbollah for sending the drones. Mikati and Bou Habib said at the time it was an unnecessarily risky action.

"Whether our message was understood in Lebanon or not, we don't care about that. What is important for us is that the enemy gets the message," he said.

The maritime border dispute between Lebanon and Israel returned to the fore last month after Israel moved a production vessel into Karish, parts of which are claimed by Lebanon.

The move pushed the Lebanese government to call for the resumption of U.S.-mediated negotiations that had hit a wall last year over demarcation disputes.

President Michel Aoun, caretaker Foreign Minister Abdallah Bou Habib, Deputy Speaker Elias Bou Saab and senior Israeli sources have in recent days announced that progress has been made in the negotiations and that they expect positive results soon.

U.S. mediator Hochstein is meanwhile accompanying U.S. President Joe Biden on a visit to Israel that began a few hours prior to Nasrallah’s speech. The U.S. mediator is expected to hold talks with Israeli energy officials over the sea border dispute with Lebanon.

When it came to the maritime borders demarcation file, Hassan Nasrallah, Naiim Qassem, Muhammad Raad, Nabil Qaouk and most Hezballah officials promised to stand behind the Lebanese government, then Khamenei gave the orders. Up went the drones. Nasrallah cannot refuse any of Khamenei's orders because Nasrallah cannot buy new underwear without Iranian financing.

They are not even allowed to wear a tie because of Iranian orders... That shows how free they are. Obvious to all Hizbollah is Iranian Basij's brainwashed foreign legion doing its dirty work. Not a grain Lebanon's culture in them.

Dear Nassy: Its not a choice between war or starvation. With you we will get both.

How long did it take him to work out the translation from Persian?

"Resistance" in all its forms is a lie.

The day this evil Iranian sectarian terrorist is brutally and violently murdered is the day we celebrate our true independence.

The safely hidden Nasrallah is drafting the Lebanese once again to die for his Welayat Al Faqeeh project.
While hiding in the comfort and safety of his underground bunker he prescribes martyrdom to all his followers.
The main force which could stop him is within the Shiite communities. They have to decide if they want to continue to suffer for Iran or they want to live in peace in Lebanon.