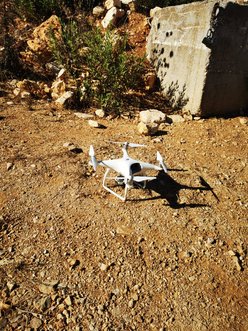 The Israeli army on Monday said it brought down a small quadcopter drone likely belonging to Hezbollah after it crossed from southern Lebanon into Israel.

“Earlier today, the Israeli Defense Forces detected the infiltration of a drone from Lebanese territory into Israeli territory before bringing it down. The aerial surveillance units monitored the drone throughout the incident,” Israeli army Arabic-language spokesman Avichay Adraee tweeted, adding that the quadcopter drone “seems to be linked to terrorist Hezbollah.”

“We will continue to work to prevent any violation of Israel’s sovereignty,” Adraee added.

The spokesman also published a photo of the apparently unscathed drone, which indicates that it was likely brought down through technological means.

The incident comes around two weeks after Israel shot down three unarmed Hezbollah UAVs headed for the Karish offshore gas field. Hezbollah said those drones were on a “reconnaissance” mission aimed at delivering a “message” to Israel as to the sea border dispute with Lebanon.

Israel later revealed that it had shot down another Hezbollah drone on June 29 as it was still flying in Lebanon’s airspace.

When they fly with their F-16s above Lebanese Airspace with pride, what is that?

I bet they wouldnt need to if it was Lebanese Army who controlled South Lebanon, and not some terror group.