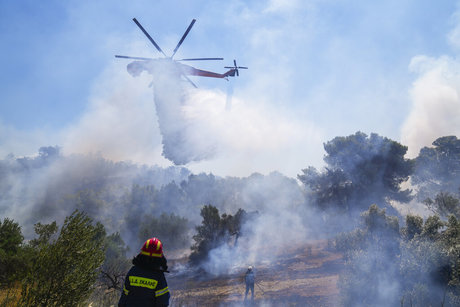 Nearly 500 firefighters struggled to contain a large wildfire that threatened hillside suburbs outside Athens for a second day Wednesday, after hundreds of residents were evacuated overnight.

Fires continued to burn across southern Europe, but authorities in France, Spain and Portugal all reported improved conditions with a respite from severe heat wave conditions.

At least two people were hospitalized in the Greek capital with breathing problems and minor burns, while local officials said several houses had been burned in the fire around Mount Penteli, 25 kilometers (16 miles) northeast of Athens.

"The conditions are very challenging. The priority is to safeguard human life, critical infrastructure and private property," Fire Service spokesman Yiannis Artopios said. Nineteen water-dropping aircraft and helicopters were operating Wednesday, officials said, adding that more than 600 people have been evacuated from their homes so far. Helicopters scooped up water pumped into outdoor tanks on the hillside before flying back into thick smoke to make the water drops.

Artopios said the fire was contained on all fronts despite difficult conditions earlier in the day with winds of up to 80 kilometers per hour (50 mph). But a second fire broke out in the hills outside the town of Megara, 40 kilometers (25 miles) to the west, prompting a new, but more limited, round of evacuations.

Greece has avoided the heat wave that is currently afflicting countries in western Europe, but fire officials say that hot and dry conditions that have lasted for weeks, as well as longer-term temperature rises, have increased the overall risk of forest fires.

Cooler weather gave firefighters in Spain and Portugal some respite but temperatures are forecast to rise back to 40 degrees Celsius (104F) in the coming days.

Petteri Taalas, the Secretary-general of the World Meteorological Organization, said more frequent and more extreme heat waves were an inevitable consequence of climate change. "In the future, these kinds of heat waves are going to be normal. We will see stronger extremes. We have pumped so much carbon dioxide in the atmosphere that the negative trend will continue for decades," Taalas said in a statement Tuesday. "I hope that this will be a wake-up call for governments."

A spate of blazes in Spain's northwestern Galicia region has burned 85 houses and forced the evacuation of 1,400 people. Spanish Prime Minister Pedro Sanchez visited the area late Tuesday and warned of "hard days ahead here in Galicia and the rest of Spain."

In France, firefighters created huge firebreaks through threatened forests in the southwest of the country, using heavy machinery to tear out trees and roots to leave large barren strips to stop the fires from spreading. After a week of raging wildfires, the blazes have slowed.

"We are pretty confident," said Ronan Leaustic, a regional official from the southwestern Gironde area. "But we are still very vigilant."

Wildfires in France so far this year have consumed 25% more land compared with the same period last year, the government said Wednesday as it announced that is requisitioning two civilian helicopters to help tackle the blazes.

Portugal's health ministry says that between July 7-18 the excess mortality rate was 1,065 deaths, with officials blaming the heat wave for the spike and saying more heat deaths are likely in coming days as high temperatures return.