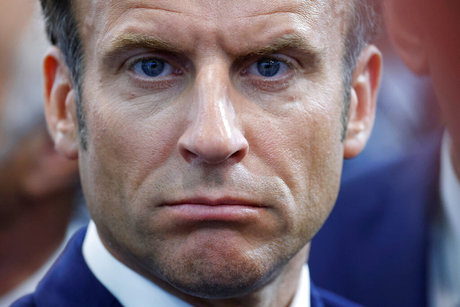 French President Emmanuel Macron on Wednesday called for the resumption of long-stalled peace talks between Israel and the Palestinians in order to prevent simmering tensions in one of Middle East's longest conflicts from boiling over again.

Speaking alongside Palestinian leader Mahmoud Abbas in the presidential palace in Paris, Macron said the situation in East Jerusalem and the Palestinian territories remains "more than worrying."

"We all know that a new spiral of violence can start at any moment," Macron said on Wednesday. He added: "To avert this threat (…) that undermines the lives of both Palestinians and Israelis, we must act."

In the short term, Macron said, that means putting an end to Israel's unilateral measures in the occupied West Bank, including the expansion of Jewish settlements and evictions of Palestinian families from their homes. Both actions are "contrary to international law," Macron said. He repeated his willingness to mobilize the international community in efforts that will lead to resumption of talks between Israel and the Palestinians and eventually result in a "just and lasting peace."

Abbas emphasized that Israel must stop "unilateral actions (...) most importantly, the building of illegal settlements" that slice the territory the Palestinians want for their state alongside Israel in pieces.

Abbas was meeting with Macron in Paris after the Palestinian leader had met with U.S. President Joe Biden in the Israeli-occupied West Bank last week. Biden offered compassion and financial assistance for hope-starved Palestinians but also delivered a blunt acknowledgment that the "ground is not ripe" for new attempts to reach an elusive peace.

Political uncertainty in Israel, which is holding another round of elections in November, and the weakness of Palestinian Authority leadership has dimmed any chance of restarting negotiations that broke down more than a decade ago.

Earlier this month, Macron hosted Israeli caretaker Prime Minister Yair Lapid in the Elysee Palace and called on him to revive talks toward peace with the Palestinians.

Lapid, who is expected to stay in the prime minister's role until the election in November, supports a two-state solution with the Palestinians. But as a caretaker leader, he isn't in a position to pursue any major diplomatic initiatives.

Under the two-state plan, Palestinians, including Palestinian citizens of Israel, would be moved to camps supported by their own labor and cut off from free international contacts. President-for-eternity Abbas describes the plan as "a state of security and stability for Jewish Israel and a state of intoxicating bliss for us".

Under no plan would Moslem citizens of Israel be forced to leave the country and be stripped of their nationality, unless they actually declared in writing that they wanted it.
According to the latest surveys less that 1% would want to give up the advantages gained by them, in all fields, over the last 75 years to go to live in a newly-established state still living those 75 years ago.

So why doesn't he complain about Mr. Abbas who for the last 5 years has refused to meet with the Israeli leadership.
Many years ago I was taught a very important sentence : Peace you make with your enemies not with your friends. Unfortunately Mr. Abbas and his cronies have not learned this yet.