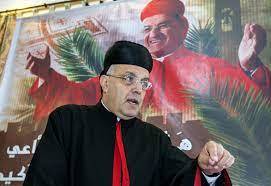 An emergency meeting was held Wednesday in Bkirki by the council of Maronite bishops to discuss the issue of General Security’s detention and lengthy interrogation of the Archbishop of the Archeparchy of Haifa and the Holy Land and the Patriarchal Exarch of Jerusalem and Palestine and Jordan, Moussa El-Hage.

“The closing statement will be strongly-worded, it will mention certain steps and officials will be demanded to execute them,” MTV reported.

“Bkirki communicated with (General Security chief) Maj. Gen. Abbas Ibrahim, who said that the detention of Archbishop Moussa El-Hage, the confiscation of his passport and banning him from travel took place based on a judicial decision from Judge Fadi Akiki,” the TV network added.

“Patriarch al-Rahi is dismayed by Archbishop El-Hage’s detention and from Judge Fadi Akiki, and he considers that he has received the message but will not back down from his stances,” MTV added.

As the Archbishop of the Archeparchy of Haifa and the Holy Land and the Patriarchal Exarch of Jerusalem and Palestine and Jordan, El-Hage, along with other Christian religious figures, is allowed to cross Lebanon's southern border and enter Israel, unlike regular Lebanese citizens.

While Lebanon and Israel remain technically at war, El-Hage visited Israel because he heads a community of Lebanese Christian Maronites living there, many of whom are refugees who collaborated with Israel during Lebanon's 1975-1990 civil war.

But he was questioned for eight hours earlier this week upon his return from Israel, local media said, before a military court summoned him for further questioning Wednesday.

El-Hage on Wednesday ignored the military court summons, issued for violating boycott laws imposed on Israel and for involvement in money laundering, an official close to the case said, asking for anonymity because he was not authorized to speak to the press.

El-Hage was bringing aid from Lebanese nationals in Israel to relatives back home who have been hit by Lebanon's crisis, the anonymous official added.

Many Lebanese rely on remittances from family abroad to weather a crushing economic crisis that began in 2019, but transporting products or money from Israel to Lebanon is illegal.

Security forces seized "large quantities of medicines, foodstuffs and canned goods, enough to fill a car, in addition to $460,000" when he re-entered Lebanon, the anonymous official said.

The archbishop handed Lebanese authorities a six-page list containing hundreds of beneficiaries' names, with each person or family expecting between $100 and $500 from relatives in Israel, the official added.

Nadim Gemayel, a lawmaker from the Christian Kataeb party, dubbed the arrest "an attack on the Maronite Church."

The case comes amid tense political jockeying ahead of a presidential election later this year that will see the post go to a Maronite under the country's sectarian political system.

Strong words from the Patriarch, a strong president….. mmmhhh but who’s got the strong weapons? That’s what I thought…

No sympathy for a religious leader who shamelessly went to to meet with brutal criminals with blood on their hands. He should instead seek to meet with the victims of the SLA if he was a true christian to build good relationships and distance himself from those who killed, tortured and raped in the name of jesus. May God punish those who enable the criminals and seek to whitewash them because they belong to their sect or tribe or village or because they give them money.